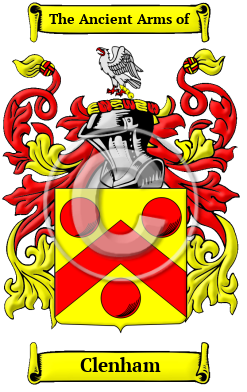 Early Origins of the Clenham family

The surname Clenham was first found in Suffolk where Great Glemham is a village and a civil parish in the Suffolk Coastal District and Little Glemham is a small village a few miles away. Both places date back to the Domesday Book where they were listed as Glaimham which probably meant "homestead or village noted for its revelry or games," having derived from the Old English words gleam + ham. [1]

Glemham Hall is an Elizabethan stately home on the outskirts of the village of Little Glemham and was built around 1560 by the De Glemham family. [2]

Early History of the Clenham family

Distinguished members of the family include Sir Henry Glemham (died 1632) was an English politician, Member of Parliament for Lewes (1593-1597), for Suffolk in 1601, for Ipswich in 1604 and for Aldeburgh (1614-1622); and his son, Sir Thomas Glemham (c. 1594-1649), an English soldier, landowner and politician who sat in the House of Commons between 1621 and 1625. He was a commander in the Royalist army during the English Civil War. [3] Sir Charles Glemham (born 1576) was an English courtier and politician, Member of Parliament for Aldeburgh (1621-1622) and Henry Glemham (Glenham) (c.1603-1670), was an English royalist churchman, Dean of Bristol...
Another 103 words (7 lines of text) are included under the topic Early Clenham Notables in all our PDF Extended History products and printed products wherever possible.

Migration of the Clenham family