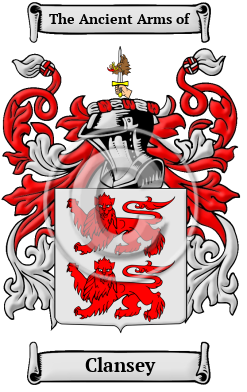 The Irish surnames in use today are underpinned by a multitude of rich histories. The name Clansey originally appeared in Gaelic as Mac Fhlannchaidh. The exact meaning of this name is undetermined; it can be translated as "son of Fhlannchadh," where "flann" means "reddish" or "ruddy." However, whether "caidh" denotes warrior as has been asserted is unknown.

Early Origins of the Clansey family

The surname Clansey was first found in Counties Clare and Leitrim. The more important of the two MacClancy septs were a branch of the MacNamaras and were from the north of County Clare, where they gave their name to Cathermacclancy. They traced their lineage from the Heber kings, and provided hereditary brehons (judges) to the O'Briens. They were most numerous in County Clare and the neighboring counties of Galway and Tipperary. The other sept of MacClancys were indigenous to Leitrim, and were Chiefs of Darty or Rosclogher. [1]

Early History of the Clansey family

This web page shows only a small excerpt of our Clansey research. Another 85 words (6 lines of text) are included under the topic Early Clansey History in all our PDF Extended History products and printed products wherever possible.

The spelling of names in Ireland during the Middle Ages was rarely consistent. This inconsistency was due to the scribes and church officials' attempts to record orally defined names in writing. The common practice of recording names as they sounded resulted in spelling variations such as Clancy, Clancey, Clanchey, Clanchy, Clansey and many more.

More information is included under the topic Early Clansey Notables in all our PDF Extended History products and printed products wherever possible.

Clansey migration to the United States +

Many destitute Irish families in the 18th and 19th centuries decided to leave their homeland, which had in many ways been scarred by English colonial rule. One of the most frequent destinations for these families was North America where it was possible for an Irish family to own their own parcel of land. Many of the early settlers did find land awaiting them in British North America, or even later in America, but for the majority of immigrants that arrived as a result of the Great Potato Famine of the late 1840s the ownership of land was often a long way off. These Irish people were initially put to work on such industrial projects as the building of bridges, canals, and railroads, or they worked at manufacturing positions within factories. Whenever they arrived, the Irish made enormous contributions to the infant nations of Canada and the United States. Some of the earliest immigrants to bearer the name of Clansey were found through extensive research of immigration and passenger lists:

Clansey Settlers in United States in the 17th Century

Clansey Settlers in United States in the 19th Century

Clansey Settlers in Australia in the 19th Century