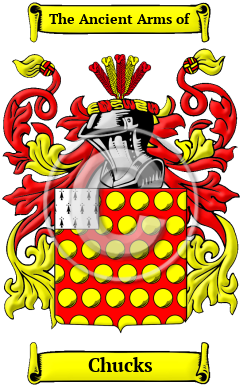 Early Origins of the Chucks family

The surname Chucks was first found in Lancashire at Ormskirk. The first record of the family was Thomas Such, who complained early in the reign of Elizabeth that certain of the inhabitants of Ormskirk had taken their corn to other mills. The entry continues: apparently there were complaints against the miller that the corn was not so well ground by him and that he took, or lost, an excessive proportion of the flour. In the end, Thomas Such built a new mill at the Knoll to help solve the issue. [1]

However, another source has a different point of origin for the family. This source claims the name was a Norman name appearing in the Roll of Battel Abbey. "All authorities are agreed in deriving this great house from the Sovereign Earls of Brittany ; but they differ materially as to the affinity it bore to the parent stock." [2]

"Alan La Zouche, the undoubted founder of the family, who in his charter to Lilleshall Priory styles himself ' son of Geoffrey le Vicomte,' lived in the time of Henry II., and acquired a great estate through his wife Alice, the heiress of the elder male line of De Belmeis. She brought him Ashby, since, as Ashby-de-la-Zouche, the head of his barony, in Leicestershire, Tong and other manors in Shropshire, and lands in Sussex and Devonshire. Their eldest son William commonly went by his mother's name; but when he died in 1199, he was succeeded by his brother Roger, who had always called himself La Zouche." [2]

North Molton, Devon was the site of another of the family. "The manor was part of the portion of Eadgytha, wife of the Confessor, and was given by John to Roger le Zouch. From the Zouches it passed to the St. Maurs. The church was given by Alan le Zouch, circa 1313, to the monastery of Lilleshull, in Shropshire." [3]

Early History of the Chucks family

Spelling variations of this family name include: Zouch, Zouche, Souch, Souche and others.

Notable of this family during the Middle Ages was William Sutch, who in 1703 had given two closes called Long Hey and Little Hey in Aughton, Lancashire for the benefit of the poor. [1] "Edward Zouche the last Lord, was one of the peers who sat in judgment on Mary Queen of Scots at Fotheringay. Elizabeth afterwards sent him on an embassy to Scotland, and appointed him her Justiciary for North and South Wales : and he was Constable of Dover and Lord Warden of the Cinque Ports under her successor. " He built the magnificent mansion of Bramhill, Hants, as a residence...
Another 163 words (12 lines of text) are included under the topic Early Chucks Notables in all our PDF Extended History products and printed products wherever possible.

Migration of the Chucks family