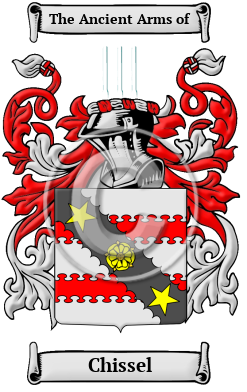 The name Chissel is part of the ancient legacy of the Anglo-Saxon tribes of Britain. It is a product of when the family lived in Chishall, two parishes in the county of Essex. It is from the place-name that the family name is derived. Today, Fort Chiswell is located in Wythe County, Virginia, United States and was originally a frontier fort built in 1758 during the French and Indian War; and the Chiswell Islands are a group of rocky, uninhabited islands in the Gulf of Alaska. Unfortunately, the reason for the named locations has been lost.

Early Origins of the Chissel family

The surname Chissel was first found in Essex at either Great Chishall or Little Chishall, both in the union of Royston, hundred of Uttlesford. [1] Chiswell Green is a village, in St Albans, Hertfordshire which dates back to 1782. The name was thought to have been derived from "the gravelly spring or stream" from the Old English "cis" + "wella" + "green." [2]

One of the first records of the family was John de Chishull (d. 1280), Bishop of London, "probably born in Essex in the village of Chishall, between Royston and Saffron from which he doubtless took his name. A branch of his family was afterwards settled at Bardfield in the same county. In 1252 he was appointed rector of Isleham in Cambridgeshire, and in 1256 he received from the king the church of Upwell in Norfolk. Previously to 1262 he had become Archdeacon of London, and in that year acted as executor for Bishop Wingham." [3]

Early History of the Chissel family

The first dictionaries that appeared in the last few hundred years did much to standardize the English language. Before that time, spelling variations in names were a common occurrence. The language was changing, incorporating pieces of other languages, and the spelling of names changed with it. Chissel has been spelled many different ways, including Chiswell, Chissell, Chishull, Chussell and others.

Distinguished members of the family include Robert Muilman French-Chiswell; and Richard Chiswell (1673-1751), a wealthy English merchant and politician, Director of the Bank of England. Edmund Chishull (1671-1733), was an English divine and antiquary, son of Paul Chishull, born at Eyworth, Bedfordshire, 22 March 1670-1671. [3] Richard Chiswell the Elder (1639-1711), ''who...
Another 50 words (4 lines of text) are included under the topic Early Chissel Notables in all our PDF Extended History products and printed products wherever possible.

Migration of the Chissel family

Thousands of English families in this era began to emigrate the New World in search of land and freedom from religious and political persecution. Although the passage was expensive and the ships were dark, crowded, and unsafe, those who made the voyage safely were rewarded with opportunities unavailable to them in their homeland. Research into passenger and immigration lists has revealed some of the very first Chissels to arrive in North America: James Chisel, who settled in Philadelphia in 1838.