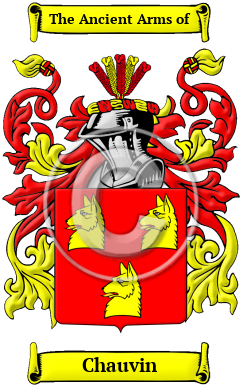 Early Origins of the Chauvin family

The surname Chauvin was first found in Britanny (French: Bretagne). Cited in early times are Renaud Chauveau, who was named bishop of Châlons in 1351, and Audouin Chauveron, who held an important position in Paris in 1381.

Early History of the Chauvin family

This web page shows only a small excerpt of our Chauvin research. More information is included under the topic Early Chauvin History in all our PDF Extended History products and printed products wherever possible.

Notable amongst this name at this time was Urbain Chauveton, an evangelist in 1560; Antoine Chauveau was caretaker of the Abbey of S. Gervais, Paris in 1580; Francois Chauveau was a painter, drawer, and engraver in Paris in 1613; François Chauveau (1613-1676), a French painter and engraver; Henri-Philippe abbey of Chauvelin was councillor at the Parliament, abbey of Montieramay, and held an important role at the cathedral of Notre-Dame in Paris in 1714; Francois-Pierre-Alexandre Chauvel was a Baron and general in Honfleur in 1766; Bernard-Francois marquis of Chauvelin was a politician in Paris in 1766; Louis-Joseph Chauveau was colonel in Cretteville...
Another 165 words (12 lines of text) are included under the topic Early Chauvin Notables in all our PDF Extended History products and printed products wherever possible.

Chauvin Settlers in Canada in the 17th Century

Chauvin Settlers in Canada in the 18th Century