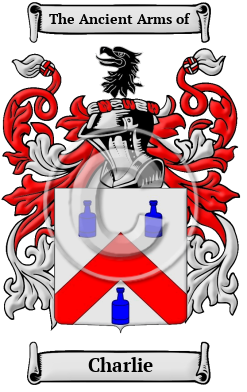 The vast movement of people that followed the Norman Conquest of England of 1066 brought the Charlie family name to the British Isles. They lived in Chorley, Lancashire, a market-town and parish, and the head of a union, in the hundred of Leyland. "The name of this place is derived from its situation on the river Chor, about a mile from its confluence with the Yarrow, and from the Saxon word Ley, a field; or from the family of Chorley, who were its ancient proprietors. The chief lordships of Chorley were subsequently held by the noble families of Ferrers and Lacy." [1]

Early Origins of the Charlie family

The surname Charlie was first found in Lancashire at Chorley. [2] We should now take a moment to explore the Cheshire branch of the family. It is generally believed that this was a latter branch as the first records there were found in the 16th century. Both townships there were originally held by the "Davenports from about the year 1400 until 1612, when it was purchased by the Downes family" and the "manor was possessed by the Harcourt family in the reign of Edward II., when the two coheiresses of Robert Harcourt married into the Cholmondeley family." [1]

In Berkshire, Walter de Cherlelaie was listed in the Pipe Rolls for 1201 and later in Lancashire, Elias de Chorlegh was listed at Putnam in 1350. [3]

Early History of the Charlie family

A multitude of spelling variations characterize Norman surnames. Many variations occurred because Old and Middle English lacked any definite spelling rules. The introduction of Norman French to England also had a pronounced effect, as did the court languages of Latin and French. Therefore, one person was often referred to by several different spellings in a single lifetime. The various spellings include Chorley, Chorly and others.

Outstanding amongst the family at this time was Josiah Chorley (d. 1719?), English Presbyterian minister, great-grandson of Richard Chorley of Walton-le-Dale, near Preston, Lancashire, and second of six sons of Henry Chorley of Preston. [5] Henry Fothergill Chorley was a journalist, author, and art critic, born Dec. 15, 1808, at Blackley Hurst, in Lancashire. "Sprung from an old Lancashire family, he had a self-willed, eccentric character, and an erratic temperament, common to most of its members, which accorded ill with the rigid tenets of the Society of Friends, to which they belonged. At 8 years of age he lost his father, and...
Another 282 words (20 lines of text) are included under the topic Early Charlie Notables in all our PDF Extended History products and printed products wherever possible.

In the United States, the name Charlie is the 10,378th most popular surname with an estimated 2,487 people with that name. [6]

Migration of the Charlie family

Many English families left England, to avoid the chaos of their homeland and migrated to the many British colonies abroad. Although the conditions on the ships were extremely cramped, and some travelers arrived diseased, starving, and destitute, once in the colonies, many of the families prospered and made valuable contributions to the cultures of what would become the United States and Canada. Research into the origins of individual families in North America has revealed records of the immigration of a number of people bearing the name Charlie or a variant listed above: Joseph Chorley who settled in Delaware Bay in 1683; Henry settled in Philadelphia in 1829; Joseph settled in Virginia in 1690; Charles arrived in New Orleans in 1820..