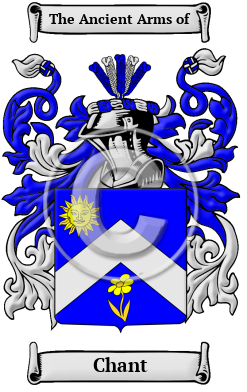 Early Origins of the Chant family

The surname Chant was first found in Dauphine.

Early History of the Chant family

This web page shows only a small excerpt of our Chant research. Another 43 words (3 lines of text) covering the years 1697, 1848, 1885, and 1897 are included under the topic Early Chant History in all our PDF Extended History products and printed products wherever possible.

Notable amongst the family at this time was Augustin-Francis de Chanteau, who was born in Metz in 1848. He came from a family of the region of Alsace of which one of the members had built the fortifications of Strasbourg and furnished the Councillors for the Chamber of counts at Dôle. He obtained his law licence in Paris and his diploma of archaeologist/paleologist. Nominated as archivist for the department at Vosges, he quit after a short time...
Another 76 words (5 lines of text) are included under the topic Early Chant Notables in all our PDF Extended History products and printed products wherever possible.

Chant migration to the United States +

Chant Settlers in United States in the 17th Century

Chant Settlers in Canada in the 19th Century

Chant Settlers in Australia in the 19th Century

Chant Settlers in New Zealand in the 19th Century

Historic Events for the Chant family +