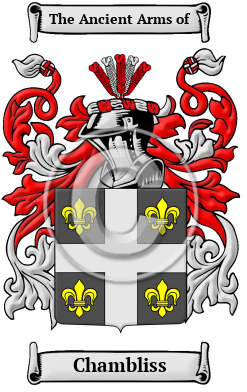 Early Origins of the Chambliss family

The surname Chambliss was first found in Burgundy (French: Bourgogne), an administrative and historical region of east-central France where the family has been a prominent family for centuries, and held a family seat with lands and manor. The family were well established in the region of Dijonnais and several members of the family distinguished themselves through their contributions toward the community in which they lived and were rewarded with lands, titles and letters patent confirming their nobility.

Early History of the Chambliss family

This web page shows only a small excerpt of our Chambliss research. Another 79 words (6 lines of text) covering the years 1641, 1687, 1673, 1688 and 1763 are included under the topic Early Chambliss History in all our PDF Extended History products and printed products wherever possible.

Spelling variations of this family name include: Chamblis, Chambliss, Chamblay, Chambley, Chambly and many more.

Notable amongst the family at this time was Jacques de Chambly (died 1687), French military officer who became a seigneur in the New World and a Governor of Acadia in 1673. Pierre Carlet de Chamblain de Marivaux (1688-1763)...
Another 36 words (3 lines of text) are included under the topic Early Chambliss Notables in all our PDF Extended History products and printed products wherever possible.

In the United States, the name Chambliss is the 4,583rd most popular surname with an estimated 7,461 people with that name. [1]

Chambliss Settlers in Canada in the 19th Century