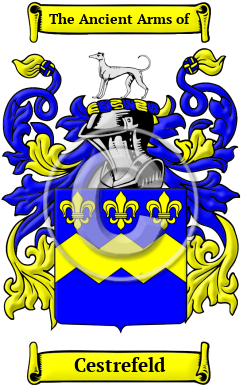 The name Cestrefeld is part of the ancient legacy of the Anglo-Saxon tribes of Britain. It is a product of when the family lived in Chesterfield, Derbyshire a market town which received its charter in the year 1204 from King John. "This place, from its Saxon name Ceaster, appears to have been a Roman station; its Roman name is said to have been Lutudarum; and there is reason to suppose that in Roman times it was an emporium of the mining districts of Derbyshire. At the period of the Norman survey it was called Cestrefeld, and was only a bailiwick to Newbold, the latter being now a small hamlet in the parish; but within a century from the Conquest, it seems to have risen into such importance as to have obtained from King John, who conferred it upon William de Briwere, a charter of incorporation, with the privilege of two markets and a fair. " [1]

Early Origins of the Cestrefeld family

The surname Cestrefeld was first found in Derbyshire, at Chesterfield, a parish, and the head of a union, in the hundred of Scarsdale.

"The ancient and distinguished Chesterfield family of the Heathcotes, who have received more than one baronetcy, have held property in that locality since the reign of Edward IV." [2]

As a surname, the name is rare as the only entry in various rolls was that of Robertus de Chesterfield and Agnes de Chasturfeld who both appeared in the Yorkshire Poll Tax Rolls of 1379. [3]

Early History of the Cestrefeld family

The first dictionaries that appeared in the last few hundred years did much to standardize the English language. Before that time, spelling variations in names were a common occurrence. The language was changing, incorporating pieces of other languages, and the spelling of names changed with it. Cestrefeld has been spelled many different ways, including Chesterfield, Chasturfeld, Cestrefeld and others.

Notables of the family at this time include Thomas Chesterfield (d. 1451 or 1452), Canon of Lichfield and author of a chronicle of the bishops of Coventry and Lichfield. On 31 Oct. 1428...
Another 33 words (2 lines of text) are included under the topic Early Cestrefeld Notables in all our PDF Extended History products and printed products wherever possible.

Migration of the Cestrefeld family

Thousands of English families in this era began to emigrate the New World in search of land and freedom from religious and political persecution. Although the passage was expensive and the ships were dark, crowded, and unsafe, those who made the voyage safely were rewarded with opportunities unavailable to them in their homeland. Research into passenger and immigration lists has revealed some of the very first Cestrefelds to arrive in North America: Henry Chesterfield who arrived in New York in 1854.