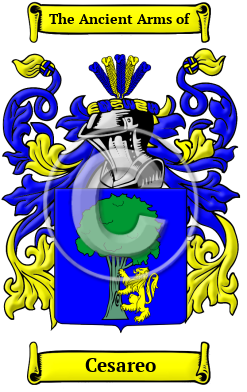 The distinguished surname Cesareo can be traced back to the ancient and beautiful region of Sicily, which is located off Southwestern Italy and incorporates the island of Sicily itself, the area of Naples, and the southern part of the Italian peninsula. Although people were originally known only by a single name, it became necessary for people to adopt a second name to identify themselves as populations grew and travel became more frequent. The process of adopting fixed hereditary surnames was not complete until the modern era, but the use of hereditary family names in Italy began in the 10th and 11th centuries. Italian hereditary surnames were developed according to fairly general principles and they were characterized by a profusion of derivatives coined from given names. The most common type of family name found in the region of Sicily is the patronymic surname, which is derived from the father's given name. During the Middle Ages, Italians adopted the patronymic system of name-making because it perfectly complemented the prevailing Feudal System. In Italy the popularity of patronymic type of surname is also due to the fact that during the Christian era, people often named their children after saints and biblical figures. The surname Cesareo was derived from the given name "Cesare," and originally derived from the famous Roman family name "Caesar." In Classical times, the name "Caesar" was associated by folk etymology with the Latin Caesaries (head of hair).

Early Origins of the Cesareo family

The surname Cesareo was first found in the year 1278, where Nicol Cesareo was listed in the Sicilian city of Messina. Nicol Cesari, was a priest in Rome during the 14th century and worked closely with Pope Martino V. Later, Giulio Cesarini was a listed as a lawyer in Rome around 1400.

Early History of the Cesareo family

This web page shows only a small excerpt of our Cesareo research. More information is included under the topic Early Cesareo History in all our PDF Extended History products and printed products wherever possible.

There are many variations of most of those Italian names that originated in the medieval era. Some of these come from regional differences, like the tradition of ending northern names in "o" and southern names in "i". Others come from inaccuracies in the recording process, which were extremely common in the eras before dictionaries standardized spelling. Some of the spelling variations of Cesareo are Cesari, Cesare, Cesaro, Cesar, De Cesare, Cesaris, De Cesaris, Di Cesare, Cesarelli, Cesaretti, Cesarini, Cesarino, Cesarìn, Cesarotti, Cesaroni, Cesarone, Cesarano, Cesarato, Cesaratto, Cesariano, Cesareni and many more.

Prominent among bearers of this surname in early times was Giuliano Cesarini was an ecclesiastic in Rome in 1470; Julian Cesarini the Elder (1398-1444), was an Italian cardinal from Rome; his son, Julian Cesarini the Younger (1466-1510) was an Italian Roman Catholic cardinal; Alessandro Cesarini (died 1542), was an Italian cardinal of the Roman Catholic Church and Bishop of Pistoia; Cesare Cesarino of Varese was a prominent architect, military engineer, and painter during the early 16th century; Giuseppe Cesari (c. 1568-1640) was an Italian mannerist...
Another 84 words (6 lines of text) are included under the topic Early Cesareo Notables in all our PDF Extended History products and printed products wherever possible.

Cesareo migration to the United States +

An investigation of the immigration and passenger lists has revealed a number of people bearing the name Cesareo:

Cesareo Settlers in United States in the 20th Century