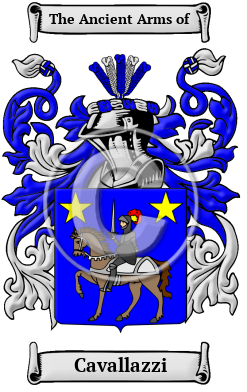 The surname Cavallazzi comes from the words "cavallaro," which means a horse dealer; or from "cavalieri," meaning a horseman, rider or knight.

Early Origins of the Cavallazzi family

The surname Cavallazzi was first found in at Ferrara, a city and comune in Emilia-Romagna, northern Italy, capital city of the Province of Ferrara, one of the more prosperous cities at this early time. Records locate the Cavalieri family in Ferrara as early as the 9th century, when Giovanni Cavalieri defended his vast lands against the Venetians.

Early History of the Cavallazzi family

This web page shows only a small excerpt of our Cavallazzi research. More information is included under the topic Early Cavallazzi History in all our PDF Extended History products and printed products wherever possible.

Italian surnames come in far more variations than the names of most other nationalities. Regional traditions and dialects are a decisive factor in this characteristic. For example, northern names tend to end in "o", while southern in "i". Also important, but not unique to Italy, was the fact that before dictionaries and the printing press most scribes simply spelled words according to their sounds. The predictable result was an enormous number of spelling variations. The recorded spellings of Cavallazzi include Cavalli, Cavallo, Cavalletti, Cavalletto, Cavallini, Cavallino, Cavallina, Cavallìn, Cavallucci, Cavalluccio, Cavalluzzi, Cavallotti, Cavallotto, Cavallone, Cavallacci, Cavallazzi, Cavallari, Cavallaro, Cavallàr, Cavalleri, Cavallero, Cavaleri, Cavalero, Cavalieri, Cavaliere and many more.

Prominent among members of the family was Pietro Cavallini (1259-1344), a well known painter born in Rome in the 13th century; Sigismondo Cavalli, a Count in Verona around 1450; Gian Marco Cavalli (c.1454- c. 1508), an Italian medallist, sculptor and goldsmith; Giovanni Battista Cavalletto, a painter, sculptor, poet, and musician in Bologna around 1500; Emilio de Cavalieri, a 16th century composer; Francesco Cavalli (1602-1676)...
Another 64 words (5 lines of text) are included under the topic Early Cavallazzi Notables in all our PDF Extended History products and printed products wherever possible.

Migration of the Cavallazzi family

A search of the immigration and passenger lists has shown a number of people bearing the name Cavallazzi: Bartolomeo Cavallero, who arrived in New Orleans, Louisiana in 1778 with his wife Maria and his six children; Diego, Antonio, Bartolomeo, Maria, Augustina, Andrea, and Louis Cavalli, who were all naturalized in Detroit in 1833.