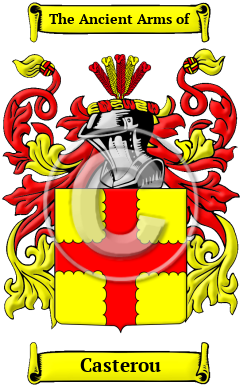 The Casterou surname is derived from the same roots as the French word "château", which means "castle".

Early Origins of the Casterou family

The surname Casterou was first found in Artois, a former province of northern France where this illustrious family held a family seat with lands and manor for many centuries.

Guigo I also known as Guigues du Chastel, Guigo de Castro and Guigo of Saint-Romain, (1083-1136), was a Carthusian monk and the 5th prior of Grande Chartreuse monastery in the 12th century.

Tanneguy III du Chastel (or Tanguy du Châtel) (1369-1449) was a French military leader of the Hundred Years' War. he was so well regarded the King Louis XI had him buried at the Basilique Notre-Dame de Cléry-Saint-André (Loiret), where Louis XI himself was later buried in 1483.

Early History of the Casterou family

Another 50 words (4 lines of text) are included under the topic Early Casterou Notables in all our PDF Extended History products and printed products wherever possible.

Migration of the Casterou family