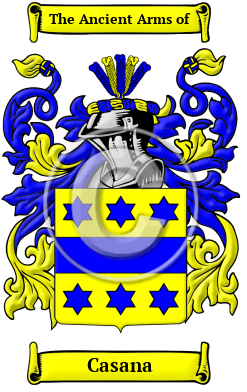 Early Origins of the Casana family

The surname Casana was first found in Modena (Etruscan: Mutna; Latin: Mutina; Modenese: Mòdna), a city in Emilia capital of the province of Modena. It became Roman in 215 B.C. It was successfully defended by Brutus against Mark Anthony. It changed hands many times between Church and Duchy. In 1859 the inhabitants declared in favor of unity with the Kingdom of Italy. The Ducal Palace is a notable. Rich in art the city has many museums and galleries. In those ancient times only persons of rank, the podesta, clergy, city officials, army officers, artists, landowners were entered into the records. To be recorded at this time was in itself a family honor. Cusano Milanino is a town and comune in the province of Milan, in Lombardy and Cusano Mutri is a comune in the province of Benevento in Campania.

Early History of the Casana family

Prominent among members of the family was Andrea del Castagno (c. 1421-1457), an Italian painter from Florence; Giovanni Domenico Cassini (1625-1712), Italian-born, French astronomer, eponym of numerous craters and Cassini's Laws; Jacques Cassini (1677-1756), French astronomer, son of Giovanni Domenico Cassini; Antonio Cassano, a captain of the militia in Famagosta in 1478; Giovanni Francesco Cassana was a famous painter around 1600; Maria Vittoria Cassana (died 1711) was an Italian painter of the late-Baroque; Nicol Cassana...
Another 75 words (5 lines of text) are included under the topic Early Casana Notables in all our PDF Extended History products and printed products wherever possible.

Casana migration to the United States +

Casana Settlers in United States in the 18th Century

Casana Settlers in United States in the 19th Century