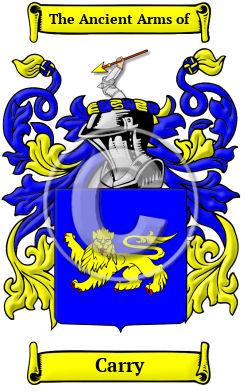 The Irish name Carry originally appeared in Gaelic as O Ciardha. However, "Carey" and its spelling variations have also been used as the Anglicized forms of six other Irish patronymics: O Ceinin, O Ciarain, Mac Giolla Ceire, O Carra, Mac Giolla Chathair, and the nearly-extinct MacFhiachra.

Early Origins of the Carry family

The surname Carry was first found in the county of Kilkenny (Irish: Cill Chainnigh), the former Kingdom of Osraige (Ossory), located in Southeastern Ireland in the province of Leinster. Today Cary is a barony in County Antrim, Northern Ireland.

Early History of the Carry family

This web page shows only a small excerpt of our Carry research. Another 174 words (12 lines of text) covering the years 1172, 1300, 1620, 1784, 1761 and 1834 are included under the topic Early Carry History in all our PDF Extended History products and printed products wherever possible.

Within the archives researched, many different spelling variations of the surname Carry were found. These included One reason for the many variations is that scribes and church officials often spelled an individual's name as it sounded. This imprecise method often led to many versions. Carrie, Carry, Carre, Carie, Carrey, MacCarry, MacHarry, MacHarris, O'Carey, Cary, M'Carrie, Kearey, Kearrie, Keerie, Keery, Keerey, M'Harrie, M'Harry, M'Hary, M'Harie and many more.

Notable amongst the family name at this time was Patrick Carrie, notable Irish patriot. Also, three famous brothers of the Carey name, John Carey, the inventor of the distress rocket for ships, went to London and taught school, becoming a most prolific writer, writing over 50 classics, including short stories and poems. The next brother, William, a painter and engraver, stayed in Dublin...
Another 63 words (4 lines of text) are included under the topic Early Carry Notables in all our PDF Extended History products and printed products wherever possible.

Carry migration to the United States +

To escape the religious and political discrimination they experienced primarily at the hands of the English, thousands of Irish left their homeland in the 19th century. These migrants typically settled in communities throughout the East Coast of North America, but also joined the wagon trains moving out to the Midwest. Ironically, when the American War of Independence began, many Irish settlers took the side of England, and at the war's conclusion moved north to Canada. These United Empire Loyalists, were granted land along the St. Lawrence River and the Niagara Peninsula. Other Irish immigrants settled in Newfoundland, the Ottawa Valley, New Brunswick and Nova Scotia. The greatest influx of Irish immigrants, however, came to North America during the Great Potato Famine of the late 1840s. Thousands left Ireland at this time for North America and Australia. Many of those numbers, however, did not live through the long sea passage. These Irish settlers to North America were immediately put to work building railroads, coal mines, bridges, and canals. Irish settlers made an inestimable contribution to the building of the New World. Early North American immigration records have revealed a number of people bearing the Irish name Carry or a variant listed above, including:

Carry Settlers in United States in the 17th Century

Carry Settlers in United States in the 18th Century

Carry Settlers in United States in the 19th Century

Carry Settlers in Canada in the 19th Century

Carry Settlers in Australia in the 19th Century

Carry Settlers in New Zealand in the 19th Century