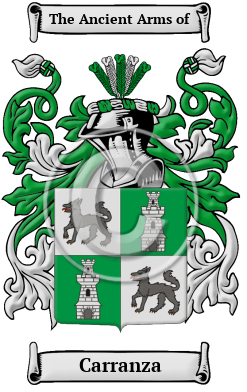 The surname Carranza comes from the place name Carranza or Karranza, a valley located in the district of Valmaseda, in the Basque province of Vizcaya.

Early Origins of the Carranza family

The surname Carranza was first found in the Basque region of Navarre.

Early History of the Carranza family

This web page shows only a small excerpt of our Carranza research. Another 88 words (6 lines of text) covering the years 1503, 1554, 1559, and 1576 are included under the topic Early Carranza History in all our PDF Extended History products and printed products wherever possible.

Spelling variations of this family name include: Carranza, Karranza and others.

Prominent among bearers of the family name at this time was the Carranza family of Navarre, who held their ancestral seat at Miranda de Arga, in the district of Tafalla. Bartolome de Carranza de Miranda (1503-1576) the Spanish theologian, born in Miranda, Navarre was of this family. A Dominican, he became professor of theology at...
Another 55 words (4 lines of text) are included under the topic Early Carranza Notables in all our PDF Extended History products and printed products wherever possible.

In the United States, the name Carranza is the 2,603rd most popular surname with an estimated 12,435 people with that name. [1]

Carranza migration to the United States +

Carranza Settlers in United States in the 16th Century

Carranza Settlers in United States in the 19th Century