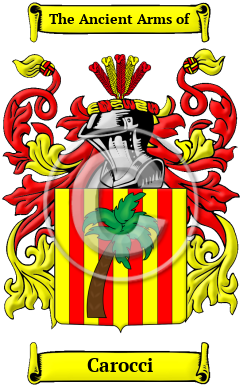 From the ancient and beautiful Italian island of Sicily emerged a variety of distinguished names, including the notable surname Carocci. Although people were originally known only by a single name, it became necessary for people to adopt a second name to identify themselves as populations grew and travel became more frequent. The process of adopting fixed hereditary surnames was not complete until the modern era, but the use of hereditary family names in Italy began in the 10th and 11th centuries. Italian hereditary surnames were developed according to fairly general principles and they were characterized by a profusion of derivatives coined from given names. Local names, also found in Italy, are derived from a place-name where the original bearer once resided or held land. Often Italian local surnames bore the prefix "di," which signifies emigration from one place to another, and does not necessarily denote nobility. The Carocci family lived in a town just outside Palermo, as in 1189, a member of the Caro family was the Archbishop of Monreale.

Early Origins of the Carocci family

The surname Carocci was first found in Sicily (Italian: Sicilia), the largest island in the Mediterranean Sea, Naples and the southern portion of the peninsula. Research shows that records of the Carocci family date back to the year 1189 when a member of the Caro family was the Archbishop of Monreale, a town just outside Palermo.

Early History of the Carocci family

This web page shows only a small excerpt of our Carocci research. More information is included under the topic Early Carocci History in all our PDF Extended History products and printed products wherever possible.

Italian surnames have a surprising number of forms in comparison with other European surnames because they reflect the regional variations and the many dialects of the Italian language, each of which has its distinctive features. For example, in Northern Italy the most standard Italian surname suffix is "I", whereas in Southern Italy the most typical surname suffix is "O". Sardinian is very different from other forms of Italian and in fact, it is considered to be its own distinct language. Additionally, spelling changes frequently occurred because medieval scribes, church officials, and the bearers of names, spelled names as they sounded rather than according to any specific spelling rules. As a consequence of the major changes in the Italian language and in the local spellings of Italian surnames that occurred over the course of history, there are numerous variations for the surname Carocci. These spelling variations include Caro, Cari, Cara, De Caro, Di Caro, Di Cara, La Cara, Li Cari, Carello, Carelli, Carella, Carillo, Caretti, Caroli, Caretta, Carino, Carini, Caruccio, Carucci, Carocci, Carracci, Caricchio, Caricchia, Carollo, Carullo, Carulli, Carotti, Carone, Caroni, Carofiglio, Carofratello, Carolillo, Carotenuto and many more.

Prominent among bearers of this surname in early times was Marchetto Cara (c. 1470-1525), an Italian composer, lutenist and singer of the Renaissance. Michelangelo Merisi (Michele Angelo Merigi or Amerighi) da Caravaggio, (1571-1610), was an Italian painter active in Rome for most of his artistic life. He is most famous for his technique of "Chiaroscuro" or light and dark contrast. Some of his most famous works include The Calling of St. Matthew, and David with the Head of Goliath. Polidoro Caldara, usually known as Polidoro da Caravaggio (c. 1499-1543) was an Italian painter of the Mannerist period...
Another 95 words (7 lines of text) are included under the topic Early Carocci Notables in all our PDF Extended History products and printed products wherever possible.

Migration of the Carocci family

A search of the immigration and passenger lists has shown a number of people bearing the name Carocci: Miss Cara, who sailed to New Orleans in 1821, and S. Caro, who arrived in San Francisco, California in 1851.