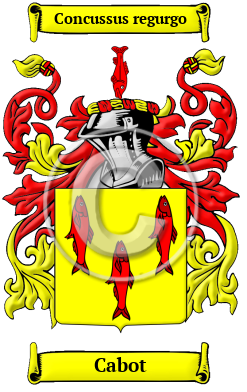 Directly translated, the French word "chabot" means "sculpin" which is a type of fish. The word "chabot" was used primarily in the Channel Islands and it is believed by some sources that it was originally used as a nickname for a fish merchant. [1]

Early Origins of the Cabot family

The surname Cabot was first found in Provence, where they were the Lords of Tourette and Châteauneuf and where they have held a family seat from very early times. The family contributed greatly during the Crusades in the Holy Land, with thirteen knights of the family registered between 1266 and 1653.

Descending from the original line of Nice, the Comtat branch of the family were rewarded for their great efforts given to the community with the Lordship of Cabrières. At the beginning of the 14th century, the family were well established in the region of Savoie and several members of this eminent family made an outstanding contribution toward the society in which they lived and were rewarded with lands, titles, and letters patent confirming their nobility. [2]

Early History of the Cabot family

Notable amongst the names at this time was Philippe de Chabot (1480-1543), also known as Amiral de Brion, count of Charny and of Buzançois, French Admiral; Henri Chabot (Henri...
Another 29 words (2 lines of text) are included under the topic Early Cabot Notables in all our PDF Extended History products and printed products wherever possible.

Cabot migration to the United States +

Cabot Settlers in United States in the 15th Century

Cabot Settlers in United States in the 18th Century

Cabot Settlers in United States in the 19th Century