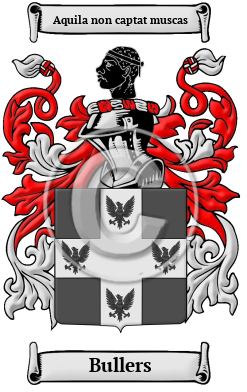 Bullers is an ancient Norman name that arrived in England after the Norman Conquest of 1066. The Bullers family lived in Cornwall. Checking further we found the name was derived from the Flemish region of Boulaere, where the family resided before emigrating to England.

Early Origins of the Bullers family

The surname Bullers was first found in Cornwall in the parish of Probus. "The great and small tithes have been for many years in the Buller family, to whom they still belong. The patronage of the curacy, which is annexed to that of Lower St. Columb, together with the great and small tithes, is now vested in the representatives of Sir Francis Buller, one of the late judges of the King's Bench." [1]

"By John Buller, Esq. of Morval, the sum of £15 per annum, out of some funded property, was given in the reign of Queen Anne for charitable uses [in the parish of Creed.]" [1]

"The manor of Drannock or Kirland, [in the parish of Gwinear] was in a divided state so early as the reign of Elizabeth, and in severalties it still remains. Of these parts, the principal possessors at present are, James Buller, Esq. of Downes, M. P. who holds a third." [1]

"More than two centuries have elapsed, since the manors of Shillingham and Trehan, together with Combe farm, have been in the Buller family. The elder branch of this family becoming extinct on the death of James Buller, Esq. in 1710, the Shillingham estate passed to the Bullers of Morval; and it is now the property of James Buller, Esq. of Downes near Crediton. Of the old mansion of the Bullers at Shillingham there are at present scarcely any remains, but the ruins of the old chapel still appear." [1]

Early History of the Bullers family

Norman surnames are characterized by a multitude of spelling variations. The frequent changes in surnames are largely due to the fact that the Old and Middle English languages lacked definite spelling rules. The introduction of Norman French to England, as well as the official court languages of Latin and French, also had pronounced influences on the spelling of surnames. Since medieval scribes and church officials recorded names as they sounded, rather than adhering to any specific spelling rules, it was common to find the same individual referred to with different spellings. The name has been spelled Buller, Bullar, Buler and others.

Outstanding amongst the family at this time was Anthony Buller (1613-1679), an English soldier and politician who sat in the House of Commons between 1659 and 1660; Francis Buller (c...
Another 30 words (2 lines of text) are included under the topic Early Bullers Notables in all our PDF Extended History products and printed products wherever possible.

Migration of the Bullers family

Many English families emigrated to North American colonies in order to escape the political chaos in Britain at this time. Unfortunately, many English families made the trip to the New World under extremely harsh conditions. Overcrowding on the ships caused the majority of the immigrants to arrive diseased, famished, and destitute from the long journey across the stormy Atlantic. Despite these hardships, many of the families prospered and went on to make invaluable contributions to the development of the cultures of the United States and Canada. Early North American immigration records have revealed a number of people bearing the name Bullers or a variant listed above: Thomas Buller who settled in Virginia in 1643; John Bullar settled in Virginia in 1635; Johnathon Buller arrived in Philadelphia, Pennsylvania in 1727..