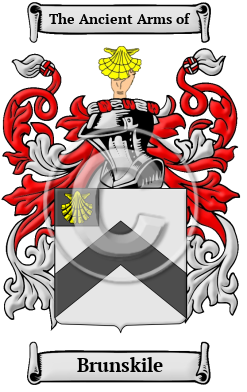 Early Origins of the Brunskile family

The surname Brunskile was first found in Durham where they held a family seat from very ancient times, some say well before the Norman Conquest and the arrival of Duke William at Hastings in 1066 A.D.

Early History of the Brunskile family

This web page shows only a small excerpt of our Brunskile research. Another 38 words (3 lines of text) covering the years 1664, 1687, 1667, 1660, 1664, 1664 and 1687 are included under the topic Early Brunskile History in all our PDF Extended History products and printed products wherever possible.

Notables of this surname at this time include: Samuel Brunsell, English incumbent at the Church of St. Mary and All Saints, Bingham from (???? - 1687); Anne Brunsell, sister of Sir Christopher Wren and wife of the rector of St James' Church, Stretham...
Another 42 words (3 lines of text) are included under the topic Early Brunskile Notables in all our PDF Extended History products and printed products wherever possible.

Migration of the Brunskile family

Some of the first settlers of this family name or some of its variants were: Matthew Brunskole who arrived in New York in 1882; George Brunskill settled in New Hampshire in 1775.