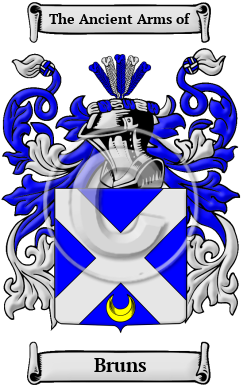 From the historical and enchanting region of France emerged a multitude of notable family names, including that of the distinguished Bruns family. Originally, the people in this region went by one (personal) name. Surnames evolved during the Middle Ages when people began to assume an extra name to avoid confusion and to further identify themselves. These names then began to become "fixed" or hereditary between the generations. One of the types of names adopted as surnames were those derived from nicknames. Nicknames, or "eke-names," were an added name that generally reflected some physical characteristics or other attribute of the person that used the name. The Bruns surname derives from the French word "brun," meaning "brown"; and therefore was a nickname for someone who habitually dressed in the colour brown.

Early Origins of the Bruns family

The surname Bruns was first found in Poitou where this noble family held a family seat since ancient times.

Participating actively throughout the Revolution, Charles François Lebrun, Duke of Plaisance, was named the Inspector General of the domaines of the Crown and on March 29, 1789, he was elected as a Deputy to the Estates General. Once his term as Deputy was completed, he became the President of the Directoire of Seine et Oise. Charles was committed to Napoléon and in 1805, he was named the Governor General of the Republic of Gênes.

After the abdication of King Louis of Holland in 1810, Charles was granted the title of Lieutenant General of the Emperor and among his duties was the organization of all public services in Holland. However, after the invasion of Holland, he had to abandon his post and return to France where he remained faithful to Napoléon.

Noel Lebrun, born in 1669, son of Jean and Catherine of Boulogne, travelled from France to Canada in the 17th century. He married Anne Brochu, daughter of Jean and Nicole, at Saint-Jean-de-l'île-d'Orléans on 4th February 1697. [1]

Early History of the Bruns family

Another 44 words (3 lines of text) are included under the topic Early Bruns Notables in all our PDF Extended History products and printed products wherever possible.

In the United States, the name Bruns is the 3,180th most popular surname with an estimated 9,948 people with that name. [2]

Bruns migration to the United States +

Bruns Settlers in United States in the 17th Century

Bruns Settlers in United States in the 18th Century

Bruns Settlers in United States in the 19th Century

Bruns Settlers in New Zealand in the 19th Century

Historic Events for the Bruns family +