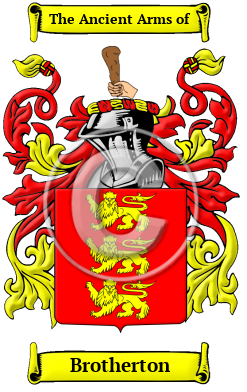 Early Origins of the Brotherton family

The surname Brotherton was first found in North Yorkshire at Brotherton, a village and civil parish in the Selby district which dates back to c. 1030 when it was listed as Brothertun. The place name literally means "farmstead of the brother, or or a man called Brothir." [1] The village is the birth place of Thomas of Brotherton, 1st Earl of Norfolk, Earl Marshal (1300-1338), fifth son of Edward I of England and Margaret of France and a younger half-brother of Edward II.

Early History of the Brotherton family

This web page shows only a small excerpt of our Brotherton research. Another 114 words (8 lines of text) covering the years 1158, 1296, 1300 and 1338 are included under the topic Early Brotherton History in all our PDF Extended History products and printed products wherever possible.

Spelling variations of this family name include: Brotherton, Brotherston and others.

Another 36 words (3 lines of text) are included under the topic Early Brotherton Notables in all our PDF Extended History products and printed products wherever possible.

In the United States, the name Brotherton is the 5,284th most popular surname with an estimated 4,974 people with that name. [2]

Brotherton migration to the United States +

Brotherton Settlers in United States in the 17th Century

Brotherton Settlers in United States in the 18th Century

Brotherton Settlers in United States in the 19th Century

Brotherton Settlers in Canada in the 18th Century

Brotherton Settlers in Australia in the 19th Century

Brotherton Settlers in New Zealand in the 19th Century