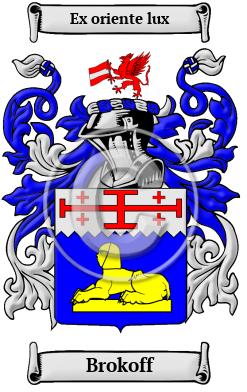 Early Origins of the Brokoff family

The surname Brokoff was first found in Silesia, where the family established itself in ancient times.

Early History of the Brokoff family

Notables of the period with the surname Brokoff were Jan Brokoff, also known as Johann Brokoff, (1652-1718) a German Baroque sculptor and carver; and his son, Michael Johann Joseph Brokoff (1686-1721), a Czech...
Another 32 words (2 lines of text) are included under the topic Early Brokoff Notables in all our PDF Extended History products and printed products wherever possible.

Migration of the Brokoff family