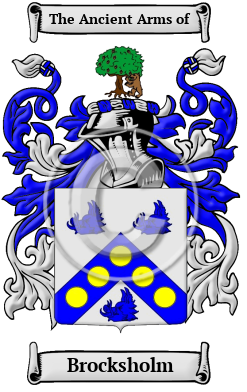 The Anglo-Saxon name Brocksholm comes from when the family resided in the village and civil parish of Broxholm, near Lincoln in the county of Lincolnshire. This parish was recorded in the Domesday Book of 1086 as lands held by Robert de Tosny. Today Broxholme is still located in the West Lindsey district, but has grown little since early times as according to the 2001 census it had a population of 58.

Early Origins of the Brocksholm family

Early History of the Brocksholm family

Before English spelling was standardized a few hundred years ago, spelling variations of names were a common occurrence. Elements of Latin, French and other languages became incorporated into English through the Middle Ages, and name spellings changed even among the literate. The variations of the surname Brocksholm include Broxholme, Broxholm, Broxsam, Broxholmn, Brocksholm, Broxhom and many more.

Another 48 words (3 lines of text) are included under the topic Early Brocksholm Notables in all our PDF Extended History products and printed products wherever possible.

Migration of the Brocksholm family