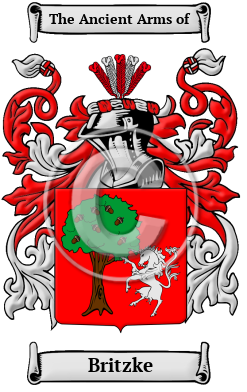 The letters "b" and "p" are pronounced similarly in the German language, and were virtually interchangeable prior to the standardization of spelling in recent centuries. Thus the surname Britzke, can appear with either letter, creating both Breitzke and Pritzke. There are several possible origins for the Britzke surname. There are two towns named Britz in the Brandenburg region. One is a southern suburb of Berlin, the other, a settlement approximately twenty-five miles northeast of Berlin. Either may have inspired the surname. The surname Britzke, can also be patronymic, derived from the father of the original bearer. Britzke would then be based upon a short form of the Slavic personal name Pribislaw. Priczlaus and Prinzel were names found in Breslau around 1300, and Preczlaus Kuschmalcz was an episcopal vassal in Silesia in 1404. The surname may also have originated with a nickname, such as "Britsch" which was used to describe a person who was perceived as "bad-tempered" or "irritable."

Early Origins of the Britzke family

The surname Britzke was first found in Saxony, where the name came from humble beginnings but gained a significant reputation for its contribution to the emerging mediaeval society. It later became more prominent as many branches of the same house acquired distant estates and branches, some in foreign countries, always elevating their social status by their great contributions to society. Jacobus dictus der Britschen lived in Mainz in 1315, as did Jakob zur Britzen in 1338 and Jekeln Peter Britschen in 1356. Hanss Brittsch was a farmer and a weaver in Kempten in 1575. Valtin Pritzman was a resident of Brandenburg in 1597.

Early History of the Britzke family

This web page shows only a small excerpt of our Britzke research. Another 66 words (5 lines of text) covering the years 1776 and 1853 are included under the topic Early Britzke History in all our PDF Extended History products and printed products wherever possible.

More information is included under the topic Early Britzke Notables in all our PDF Extended History products and printed products wherever possible.

Britzke migration to the United States +

Britzke Settlers in United States in the 20th Century