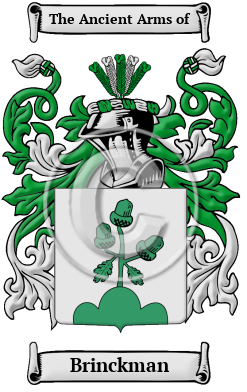 The Brinckman surname is of topographic origin, deriving from the Middle Low German word "brinc," which referred to a raised meadow among the low-lying marshlands. No doubt the first bearers of this name lived or worked on a such a piece of land.

Early Origins of the Brinckman family

The surname Brinckman was first found in Holland, where the name became noted for its many branches in the region. The name was first recorded in North Holland, a province of the Netherlands. The principal cities are Amsterdam, Haarlem and Hilversum. It was the seat of the old Counts of Holland. One early record is of a Johann Brinkeman, resident of Barth, Pomerania in the year 1334.

Early History of the Brinckman family

This web page shows only a small excerpt of our Brinckman research. Another 69 words (5 lines of text) covering the years 1841 and 1892 are included under the topic Early Brinckman History in all our PDF Extended History products and printed products wherever possible.

More information is included under the topic Early Brinckman Notables in all our PDF Extended History products and printed products wherever possible.

Migration of the Brinckman family

Some of the first settlers of this family name or some of its variants were: Lambert Huvbertse Brink, who arrived in New Netherlands between the years 1620-1664; Joris Brinkerhoff, who was on record in New York in 1638; Jacob Brink, who came to Maryland in 1719.