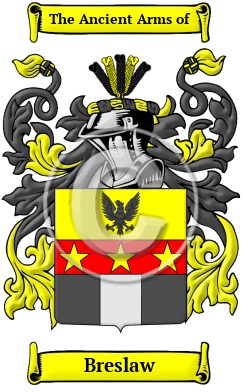 It was in the ancient duchy of Saxony, a land with a long and glorious history, that the noble surname Breslaw first appeared. After the fall of the Roman Empire in the 5th century, the Saxons inhabited the territories in north central Germany. However, in the 8th century, the pagan Saxons were conquered by the Carolingian Emperor Charlemagne. Charlemagne, who wanted to protect the Rhineland and convert new souls to Christianity, repeatedly invaded the Saxon lands and baptized the Saxons by force. The Saxons resisted his campaigns for 32 years, but in 782, Charlemagne ordered the execution of nearly 5,000 Saxons in a single day. Saxony submitted to Charlemagne's army and the missionaries that followed. By the 9th century, Frankish control of Saxony was established and the Saxons were gradually converted to Christianity. By the end of the 10th century, the Saxons governed one of the most powerful duchies in Germany. The name Breslaw was first found in Saxony. The name derives from the designation "Breslauer," which describes a person from the city of Breslau (now Wroclaw, Poland), the former capital of Lower Silesia.

Early Origins of the Breslaw family

The surname Breslaw was first found in Saxony, where the name was closely identified in early mediaeval times with the feudal society which would become prominent throughout European history. The name would later emerge as a noble family with great influence, having many distinguished branches, and become noted for its involvement in social, economic, and political affairs. The name derives from the designation "Breslauer," which describes a person from the city of Breslau (now Wroclaw, Poland,) the former capital of Lower Silesia. The progenitor of the oldest line is taken to be Johann Bressler, who in 1395 was Secretary of State to Kaiser Wenzel. His son, Bernhard, acquired estates at Pirschen in the region of Neumark in Silesia. Berhard's great-grandson, Johann Bressler, brought one branch of the family to Strasbourg where descendents are still found today.

Early History of the Breslaw family

This web page shows only a small excerpt of our Breslaw research. Another 134 words (10 lines of text) covering the years 1709, 1792, 1703 and 1792 are included under the topic Early Breslaw History in all our PDF Extended History products and printed products wherever possible.

Notables of the period with the surname Breslaw were Christoph von Bressler, who as a Buergermeister in Neumark was ennobled in 1703 at the hands of Kaiser Rudolph II. His brother, Joachim von Bressler...
Another 34 words (2 lines of text) are included under the topic Early Breslaw Notables in all our PDF Extended History products and printed products wherever possible.

Migration of the Breslaw family

Some of the first settlers of this family name or some of its variants were: Christina Bresller, who came to New York in 1710. Johannes Breslauer came to Philadelphia in 1754; as did Georg Adam Bresler in 1765; and Nikolas Bresler in 1749. M. Breslauer arrived in Texas in 1860.