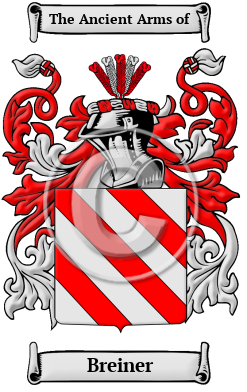 The region that comprises the modern state of Austria is the ancient homeland of the Breiner family. Austria, which was originally home to a Celtic people, was conquered by the Roman Empire in about 15 BC. Following the fall of Rome, Austria was repeatedly invaded by barbarian tribes, such as the Vandals, Visigoths, and Huns, who swept in from the east. During the 5th and 6th centuries, the Alemanni, Avars and Slavs settled Austria. The Avars were defeated in 785 by the Frankish emperor Charlemagne, who set up the East Mark, which later became known as the Österreich. Austria was ruled by the Babenburger dynasty until 1278, when they were succeeded by the Hapsburg dynasty, which ruled Austria until the 20th century.

Early Origins of the Breiner family

The surname Breiner was first found in Austria and Tyrol, where the family contributed greatly to the development of an emerging nation and would later play a large role in the political conflicts of the area. The family branched into many houses, some of which acquired estates and manors throughout the surrounding regions, where they played significant roles in the social and political affairs. The oldest and most prominent branch was known as Brunner (Prunner) von Vasoltsberg. They were members of the Styrian nobility from as early as 1363. The progenitor is believed to be one "Heinrich," a relative of Count Eberhard zu Wallsee, who lived around 1363. Of his direct descendants, Colomann Brunner was Privy Councillor to the Austrian Emperor around 1566.

Early History of the Breiner family

In the medieval era, many different cultural groups lived in the German states. There are thus many regional variations of German surnames from that era. Westphalians spoke Low German, which is similar to modern Dutch. Many German names carry suffixes that identify where they came from. Others have phrases attached that identify something about the original bearer. Other variations in German names resulted from the fact that medieval scribes worked without the aid of any spelling rules. The spelling variations of the name Breiner include Brunner, Bruner, Bruenner, Bruener, Breunner, Breuner, Bruenn and many more.

During this period prominent bearers of the name Breiner were Conrad Brunner (died 1410), a Swiss Benedictine monk, he was abbot of the monastery at Muri in today's Canton of Aargau (1380-death), joined the order and in 1380, elected abbot, first head of...
Another 43 words (3 lines of text) are included under the topic Early Breiner Notables in all our PDF Extended History products and printed products wherever possible.

Breiner migration to the United States +

Austria was made a republic after the First World War. The Austro-Hungarian Empire was broken up by the Treaty of Versailles and many of its people found themselves in the new nation of Czechoslovakia. Many other Austrians and expatriate Austrians made their way to North America in the 20th century. Most landed in Philadelphia, later continuing on to the states of Ohio, Texas, Illinois, California, New York, and Maryland. Some Austrian settlers also went to western Canada and Ontario. Research into the origins of individual families in North America revealed records of the immigration of a number of people bearing the name Breiner or a variant listed above:

Breiner Settlers in United States in the 18th Century

Breiner Settlers in United States in the 19th Century

Breiner Settlers in United States in the 20th Century