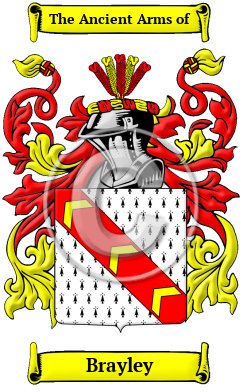 Early Origins of the Brayley family

The surname Brayley was first found in Worcestershire where Walter de Brayly was listed in the Subsidy Rolls of 1275. Much later, John Brailey and William Brayley were found in Devon in 1642. And it is here that one source claims the name is from Brayley Barton in East Buckland. [1]

Early History of the Brayley family

Distinguished members of the family include Edward Wedlake Brayley, the Elder (1773-1854), English topographer and archæologist, born in the parish of Lambeth, Surrey, in 1773, who was apprenticed to one of the most eminent practitioners of the art of enamelling in the metropolis. Before the term of his indentures had expired he became acquainted with John Britton, 1771-1857, whom he used to meet at the shop of Mr. Essex in Clerkenwell. Both the young men had literary and artistic tastes and aspirations, and longed to emancipate themselves from the mechanical pursuits in which they were engaged. They formed a close friendship...
Another 259 words (18 lines of text) are included under the topic Early Brayley Notables in all our PDF Extended History products and printed products wherever possible.

Brayley migration to the United States +

Brayley Settlers in United States in the 17th Century

Brayley Settlers in United States in the 18th Century

Brayley Settlers in United States in the 19th Century

Brayley Settlers in West Indies in the 17th Century