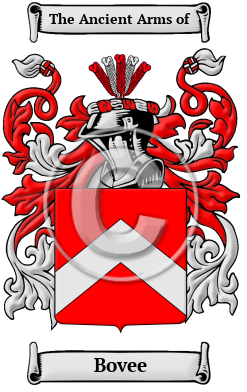 Early Origins of the Bovee family

The surname Bovee was first found in Marne adjacent to Lorraine, where the family has been a prominent family for centuries, and held a family seat with lands and manor at Reims. The family were well established in the region of Nancy and several members of the family distinguished themselves through their contributions toward the community in which they lived and were rewarded with lands, titles and letters patent confirming their nobility. The name descends from St Beuve, in the 12th century. Provencal St Beuvon was so honored for his great resistance against the Saracens.

Early History of the Bovee family

This web page shows only a small excerpt of our Bovee research. Another 55 words (4 lines of text) are included under the topic Early Bovee History in all our PDF Extended History products and printed products wherever possible.

More information is included under the topic Early Bovee Notables in all our PDF Extended History products and printed products wherever possible.

In the United States, the name Bovee is the 12,094th most popular surname with an estimated 2,487 people with that name. [1]

Migration of the Bovee family