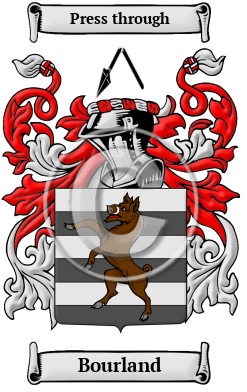 The ancestors of the Bourland family came to Scotland with the Normans in the 11th century. The Bourland surname is derived from someone who lived in one of the numerous locations named Borland or Boreland in the counties of Dumfriesshire, Galloway, Fife, and Perthshire. The name of these places is thought to mean home-farm. [1]

"Bordlands were lands which the lords kept in their hands for the maintenance of their board or table. " [2]

Early Origins of the Bourland family

Back in Scotland where most families today call their homeland, "James Bordland [was a ] witness in Ayrshire, 1513. Allan Bordlandes was a weaver in Edinburgh in 1609. In the same record the name also appears as Borland, Bordland, Borelands." [1]

Early History of the Bourland family

There has been great variation in spelling of Scottish names over the centuries. Spelling variations of the name Bourland include Boland, Borland, Bolan, Bolland, Bollin, Boreland and many more.

Notable among the family at this time was James Borland (1774-1863), Scottish inspector-general of army hospitals, born at Ayr, N.B., in April 1774, and entered the army medical department as surgeons-mate in the 42nd Highlanders in 1792. Having been promoted on the staff next year, he made two campaigns under the Duke of York in Flanders, after which he proceeded to the West Indies as surgeon, 23rd royal Welsh fusiliers. He was then again transferred to the staff, and did duty...
Another 80 words (6 lines of text) are included under the topic Early Bourland Notables in all our PDF Extended History products and printed products wherever possible.

In the United States, the name Bourland is the 11,107th most popular surname with an estimated 2,487 people with that name. [5]

Bourland migration to the United States +

Settlers of this name who made their way from Scotland to North America include:

Bourland Settlers in United States in the 19th Century

Bourland Settlers in United States in the 20th Century