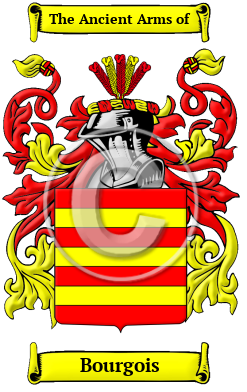 The early French language of the northwestern region known as Brittany (French: Bretagne) is the soil from which the many generations of the Bourgois family have grown. The name Bourgois was given to a member of the family who was a person known as a "freeman". The name Bourgois is derived from the French word "bourgeois", which in medieval times was used to refer to the "free-men" of a town. "Free-men" were those whose status was between the noble classes and the serfs, who were obligated to work the feudal estates of the lords.

Early Origins of the Bourgois family

The surname Bourgois was first found in Brittany, where the family first originated and maintained their status as one of the more distinguished families of the region.

Several family members figured amongst the nobles of Trégnier en 1437. The Lords of Auteville, Heauville, and Gruchy were all ennobled in 1507. The family prospered and branched out into other regions such as Quimperlé, receiving its title of nobility in 1711.

The family name of Bourgeois was later found in the sub-prefecture of Brest as well as in the region of Poitou where several members held the position of principal county magistrate. The patronymic Le Bourgeois was also registered in Normandy, giving its name to four prominent families that were ennobled in 1666 and in 1671. [1]

Jacques Bourgeois, born in 1618, was a French surgeon that settled in the New World in the 17th century. He arrived in Acadia aboard the ship Aulnay in the year of 1642. A year after arriving in Canada he married Jeanne Trahan at Port-Royal in 1643. Jacques worked as a military doctor and is regarded as the founder of Beaubassin, originally an Acadian village that is now located in the Canadian province of Nova Scotia. [2]

Early History of the Bourgois family

Changes of spelling have occurred in most surnames. The earliest explanation is that during the early development of the French language, names were not yet fixed in spelling. Usually a person gave his version of his name, phonetically, to a scribe, a priest, or a recorder. This depended on accent, and local accents frequently changed the spelling of a name. Some variables were adopted by different branches of the family name. Hence, there are some spelling variations of the name Bourgois, including Bourgeois, Bourgois, Bourgeoys, Bourgeot, Le Bourgeois, de Bourgeois, Bourjois, Bourgès, Bourgeix and many more.

Notable amongst this name at this time was Marguerite Bourgeoys, C.N.D., (1620-1700), born in Troyes, France, she was the French foundress of the Congregation of Notre Dame of Montreal; Charles Le Bourgeois, squire and...
Another 33 words (2 lines of text) are included under the topic Early Bourgois Notables in all our PDF Extended History products and printed products wherever possible.

Bourgois migration to the United States +

Approximately 110 years after the first landings by Cartier, there were only about 300 people in Quebec. France gave land incentives for 2,000 migrants during the next decade. Early marriage was desperately encouraged amongst the immigrants. The fur trade attracted migrants, both noble and commoner. 15,000 explorers left Montreal in the late 17th and 18th centuries. By 1675, there were 7000 French in Quebec. Migration to New France (Quebec) continued from France until it fell in 1759. In the year 1675 the Acadian presence in Nova Scotia, New Brunswick and Prince Edward Island had reached 500. In 1755, 10,000 French Acadians refused to take an oath of allegiance to England and were deported to Louisiana. The French founded Lower Canada, thus becoming one of the two great founding nations of Canada. The distinguished family name Bourgois has made significant contributions to the culture, arts, sciences and religion of France and New France. Amongst the settlers in North America with this distinguished name Bourgois were

Bourgois Settlers in United States in the 18th Century

Bourgois Settlers in New Zealand in the 19th Century