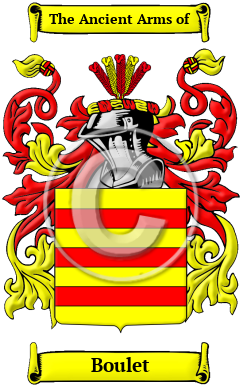 The Boulet surname is generally thought to derived from the Old French word "boul", denoting a type of birch tree. As a name it was likely first used by someone living near such trees, or perhaps from a place with a name derived from the tree name. It has also been suggested that some instances of the Boulet name find their roots in the French word "boule," which means "ball." In this case the name was likely originally a nickname for someone of a rotund shape. La Boulaye is a commune in the Saône-et-Loire department in the region of Bourgogne in eastern France. Fort De La Boulaye, also known as Mississippi Fort, was a fort built by the French in 1700, to take control over the Mississippi. Native Americans forced the French to vacate the fort by 1707.

Early Origins of the Boulet family

The surname Boulet was first found in Normandy (French: Normandie), the former Duchy of Normandy, where the family first originated, maintaining their status as one of the more distinguished families of the region. Simon Boulet, squire and Lord of Crahan, first registered the family coat of arms in Bayeux in 1696. The family prospered and branched out into other regions in France such as Poitou, Aunis, and Saintonge. [1]

Robert Boulet, born in 1630, married Françoise Grenier, born in 1634, in France in 1657. Robert and Françoise, along with their daughter, Jacqueline, travelled from La Rochelle, France to Quebec, Canada in 1662. They remained together in Quebec until Robert's death on 24th March 1707. Françoise passed away two years later on 29th January 1709. [2]

Early History of the Boulet family

French surnames were subject to numerous spelling alterations depending on the region and time it was used. The early development of the French language relied heavily on borrowing elements and grammar from other languages. For example, Old French was infused with Germanic words and sounds when barbarian tribes invaded and settled in France after the fall of the Roman Empire. Middle French also borrowed heavily from the Italian language during the Renaissance. As a result of these linguistic and cultural influences, the name Boulet is distinguished by a number of regional variations. The many spelling variations of the name include Boulet, du Boulet, Boulez, Boullet, Boullée, Bouley, Boulay, Boullay, Bouletot, Boulot, Boullot, Boulais, Bouloy, Bouloi, Boulois, Duboulay, Dubouloy, Boul, Boule, Boulle, Boulles, Bouleau, Boulleau and many more.

Notable amongst the family in this period was César-Egasse du Boulay (died 1678), known as Bulaeus, a French historian; André Charles Boulle (1642-1732), French cabinetmaker who became one of the most important suppliers...
Another 32 words (2 lines of text) are included under the topic Early Boulet Notables in all our PDF Extended History products and printed products wherever possible.

Boulet migration to the United States +

France finally gave land incentives for 2,000 migrants during the 1700s. Early marriage was encouraged in New France, and youths of 18 took fourteen-year-old girls for their wives. The fur trade was developed and attracted migrants, both noble and commoner from France. 15,000 explorers left Montreal in the late 17th and 18th centuries, leaving French names scattered across the continent. The search for the Northwest passage continued. Migration from France to New France or Quebec, as it was now more popularly called, continued until 1759. By 1675, there were 7000 French in Quebec. By the same year the Acadian presence in Nova Scotia, New Brunswick and Prince Edward Island had reached 500. In the treaty of Utrecht, the Acadians were ceded by France to Britain in 1713. In 1755, 10,000 French Acadians refused to take an oath of allegiance to England and were deported. They found refuge in Louisiana. Meanwhile, in Quebec, the French race flourished, founding in Lower Canada, one of the two great solitudes which became Canada. Many of this distinguished family name Boulet were prominent in social, cultural, religious and political affairs in France and New France. Amongst the settlers in North America with this distinguished name Boulet were

Boulet Settlers in United States in the 19th Century

Boulet Settlers in Canada in the 17th Century

Boulet Settlers in Canada in the 18th Century