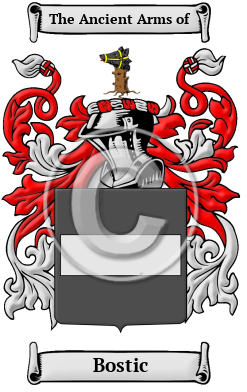 The ancestors of the name Bostic date back to the Anglo-Saxon tribes of Britain. The name is derived from when the Bostic family lived in Cheshire, where they derived their name from the township of Bostock, in the parish of Davenham.

Early Origins of the Bostic family

The surname Bostic was first found in Cheshire at Bostock, a township, in the parish of Davenham, union and hundred of Northwich. "This place gave name to a family descended from Osmerus, lord of Bostock in the reign of William the Conqueror: the heiress of the elder branch brought the manor in the latter part of the 15th century to the Savages." [1]

"John Bostock, Abbot of St. Alban's, a learned divine and poet in the time of Henry VI., was born [at Wheathampstead, Hertfordshire], and was commonly called John of Wheathampstead." [1]

Early History of the Bostic family

This web page shows only a small excerpt of our Bostic research. Another 85 words (6 lines of text) covering the years 1593, 1654, 1614, 1623, 1773 and 1846 are included under the topic Early Bostic History in all our PDF Extended History products and printed products wherever possible.

It is only in the last few hundred years that the English language has been standardized. For that reason, early Anglo-Saxon surnames like Bostic are characterized by many spelling variations. As the English language changed and incorporated elements of other European languages, even literate people changed the spelling of their names. The variations of the name Bostic include: Bostock, Bowstock, Boast, Bostake, Bostick and many more.

Distinguished members of the family include John Bastwick (1593-1654), an English Puritan physician and controversial writer, born at Writtle, in Essex. "He was entered of Emmanuel College, Cambridge, on 19 May 1614, but remained there only a very short time. Leaving the university without a degree, he went 'on his travels,' and served for a...
Another 55 words (4 lines of text) are included under the topic Early Bostic Notables in all our PDF Extended History products and printed products wherever possible.

In the United States, the name Bostic is the 2,662nd most popular surname with an estimated 12,435 people with that name. [2]

Migration of the Bostic family

Many English families tired of political and religious strife left Britain for the new colonies in North America. Although the trip itself offered no relief - conditions on the ships were extremely cramped, and many travelers arrived diseased, starving, and destitute - these immigrants believed the opportunities that awaited them were worth the risks. Once in the colonies, many of the families did indeed prosper and, in turn, made significant contributions to the culture and economies of the growing colonies. An inquiry into the early roots of North American families has revealed a number of immigrants bearing the name Bostic or a variant listed above: Francis Boast and his wife and five children settled in Nova Scotia in 1774; Henry Bostock settled in Maryland in 1779; Henry Bostock settled in Barbados in 1635.

Suggested Readings for the name Bostic +