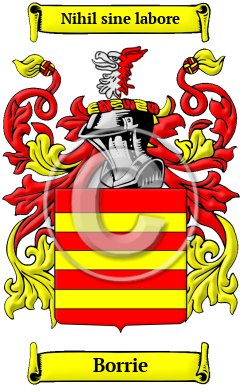 Borrie is one of the many new names that came to England following the Norman Conquest of 1066. The Borrie family lived in the county of Devon, where the family settled after arriving in England with William the Conqueror at the time of the Norman Conquest of England. The name is derived from the phrase at the Bury which has evolved to the more modern term borough.

Early Origins of the Borrie family

The surname Borrie was first found in Devon, in the parish of Berry-Pomeroy and before that Berry or Berri was the appellation of one of the old provinces of France. [1] [2] Another source notes "scattered disconnectedly over England. It is most numerous in Lancashire, and afterwards in the counties of Northampton, Warwick, and Devon. Probably it is usually derived from places, Berry being the name of a Devonshire parish, whilst Bury is the name of towns and localities in Lancashire, Suffolk, etc." [3]

Early History of the Borrie family

Anglo-Norman names are characterized by a multitude of spelling variations. When the Normans became the ruling people of England in the 11th century, they introduced a new language into a society where the main languages of Old and later Middle English had no definite spelling rules. These languages were more often spoken than written, so they blended freely with one another. Contributing to this mixing of tongues was the fact that medieval scribes spelled words according to sound, ensuring that a person's name would appear differently in nearly every document in which it was recorded. The name has been spelled Berry, Bery, Berey, De Berry and others.

Outstanding amongst the family at this time was John Berry, High Sheriff of Herefordshire in 1450; Sir Thomas Berry of Buckland; Alexander Berry (1781-1873), Scottish surgeon, merchant, and explorer after whom the Australian town is named; Sir John Berry (1635-1690), English naval officer of the Royal Navy, and was in 1675 the captain of the annual convoy to Newfoundland; and Major-General James Berry (d. 1691), English Parliamentary officer who fought in the English Civil War. On the more infamous side, it is claimed that Charlotte de Berry (born 1636) was an English female...
Another 92 words (7 lines of text) are included under the topic Early Borrie Notables in all our PDF Extended History products and printed products wherever possible.

Migration of the Borrie family to Ireland

Some of the Borrie family moved to Ireland, but this topic is not covered in this excerpt.
Another 66 words (5 lines of text) about their life in Ireland is included in all our PDF Extended History products and printed products wherever possible.

Borrie Settlers in New Zealand in the 19th Century