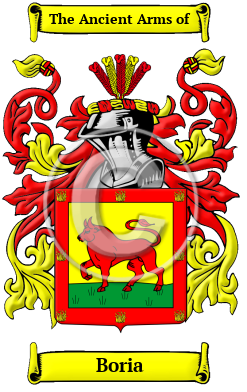 The distinguished Spanish surname Boria is of toponymic origin, being derived from a place where the initial bearer once resided or held land. In this case, the surname Boria signifies a "native of Borja." The place name Borja is itself derived from the Arabic word "burdz," which means "tower" and is an indication that in the town of Borja there were several towers or a prominent tower.

Early Origins of the Boria family

The surname Boria was first found in Zaragoza, in the region of Aragon in Spain. The oldest records of the surname Boria are references to the family Borja de Zaragoza, whose family seat was in the place called Borja, from where they took their name. The lord of this city was the count Don Pedro de Alares of the twelfth century, who was a lieutenant of the emperor and of king Don Alfonso I of Aragon. He was considered by many to have been the prime source of the lineage.

Early History of the Boria family

Spelling variations of this family name include: Borja, Borgia, Boria, Borjen, Borges, Borjas and others.

Prominent among bearers of the family name in this era was Juan Castellar y de Borja (1441-1505), a Spanish Roman Catholic bishop and cardinal; Rodrigo Borja (1431-1503), who became Pope Alexander VI. He was an able politician, but he is remembered for his irreligious worldliness; Among his children was...
Another 48 words (3 lines of text) are included under the topic Early Boria Notables in all our PDF Extended History products and printed products wherever possible.

Boria migration to the United States +

Boria Settlers in United States in the 19th Century

Boria Settlers in United States in the 20th Century