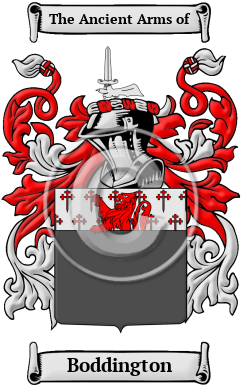 The name Boddington is part of the ancient legacy of the Anglo-Saxon tribes of Britain. It is a product of when the family lived in Boddington, which had parishes in the county of Gloucestershire, as well as the county of Northampton.

Early Origins of the Boddington family

The surname Boddington was first found in Gloucestershire at Boddington, a parish, in the union of Tewkesbury, partly in the Lower division of the hundred of Westminster. "This place is distinguished as the scene of the last great battle fought (in 893) between Alfred the Great and the Danes, who, having intrenched themselves, were surrounded by the king with the whole force of his dominions, with the view of reducing them by famine. After having been compelled to eat their horses, many perished from hunger, and the remainder made a desperate sally upon the English; a great number fell in the action, but a considerable body effected their escape." [1]

Upper and Lower Boddington are parishes in the union of Banbury, hundred of Chipping-Warden, S. division of the county of Northampton. [1]

Early History of the Boddington family

This web page shows only a small excerpt of our Boddington research. Another 71 words (5 lines of text) are included under the topic Early Boddington History in all our PDF Extended History products and printed products wherever possible.

The first dictionaries that appeared in the last few hundred years did much to standardize the English language. Before that time, spelling variations in names were a common occurrence. The language was changing, incorporating pieces of other languages, and the spelling of names changed with it. Boddington has been spelled many different ways, including Boddington, Bodington and others.

More information is included under the topic Early Boddington Notables in all our PDF Extended History products and printed products wherever possible.

Boddington Settlers in Australia in the 19th Century

Boddington Settlers in New Zealand in the 19th Century

Boddington Settlers in West Indies in the 17th Century