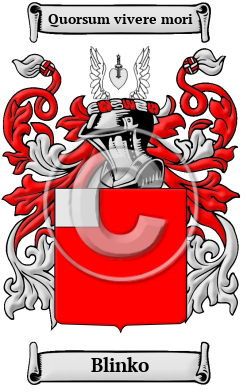 The roots of the Blinko surname reach back to the language of the Viking settlers who populated the rugged shores of Scotland in the Medieval era. The Blinko surname comes from someone having lived in the counties of the Scottish/English Borderlands.

Early Origins of the Blinko family

The surname Blinko was first found in Cumberland at either Great Blencow or Little Blencow, townships in the parish of Greystock, union of Penrith, Leath ward. Of interest is this entry about Little Blencow: "Near an ancient house, once the residence of the Blencows, are some dispersed ruins of buildings, particularly those of a chapel, with a burial-ground adjoining; and near the road is an inclosed cemetery, in which stands a stone cross, with the arms of the family engraved on it." [1]

Early History of the Blinko family

Spelling variations are extremely common among Scottish names dating from this era because the arts of spelling and translation were not yet standardized. Spelling was done by sound, and translation from Gaelic to English was generally quite careless. In different records, Blinko has been spelled Blencoe, Blencow, Blencowe, Blacoe, Blackow, Blacowe, Blenco, Blenko, Blencko, Blanco and many more.

Notable amongst the family at this time was Henry Blencowe, High Sheriff of Cumberland in 1625; and Anne Blencowe, Lady Blencowe, née Wallis (1656-1718), an English compiler of recipes. It is generally thought that she developed an early version of what is now named a "stock cube" or "bouillon cube." She called her recipes "receipts" and were kept in the library of her daughter Susanna Jennens at Weston Hall. The house passed through the female line until the book was discovered by Georgia Sitwell who arranged for the book to be published in 1925...
Another 93 words (7 lines of text) are included under the topic Early Blinko Notables in all our PDF Extended History products and printed products wherever possible.

Migration of the Blinko family

Those who made the voyage were greeted with ample opportunity to acquire land and a political climate far away from the oppressive monarchy of the old country. They settled along the east coast of what would become Canada and the United States. In the American War of Independence, those who remained loyal to England traveled north to Canada as United Empire Loyalists. In this century, many Scots living in North America have begun to recover their rich heritage through festivals, highland games, and Clan societies. An examination of passenger and immigration lists has shown early immigrants bearing the name Blinko: D. Blanco who arrived in New Orleans in 1823; Richard Blencowe arrived in New York in 1830; Richard Blencowe settled in Boston Massachusetts in 1774; and many more..