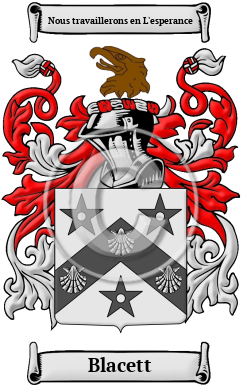 Early Origins of the Blacett family

The surname Blacett was first found in Northumberland at Wylam, a township, in the parish of Ovingham, union of Hexham, E. division of Tindale ward. "The manor was an appurtenance to the monastery of Tynemouth, and was granted by the crown to a branch of the Fenwick family, of Fenwick Tower, from whom it passed to the Blacketts, in the reign of Charles II. It is now the property of Christopher Blackett, Esq., of Wylam House." [1]

Early History of the Blacett family

Although the name, Blacett, appeared in many references, from time to time, the surname was shown with the spellings Blackett, Blackitt, Blackhead, Blacket, Blackit and others.

Notable amongst the family name during their early history was Sir William Blackett, 1st Baronet (1621-1680), English businessman in Newcastle and a politician who sat in the House of Commons from 1673 to 1680; Sir Edward Blackett, 2nd Baronet (1649-1718), an English...
Another 41 words (3 lines of text) are included under the topic Early Blacett Notables in all our PDF Extended History products and printed products wherever possible.

Migration of the Blacett family

Gradually becoming disenchanted with life in Ireland many of these uprooted families sailed aboard the armada of sailing ships known as the "White Sails" which plied the stormy Atlantic. These overcrowded ships often arrived with only 60 to 70% of their original passenger list, many dying of cholera, typhoid, dysentery or small pox. In North America, some of the first immigrants who could be considered kinsmen of the Blacett family name Blacett, or who bore a variation of the surname were William Blackhead who settled in Virginia in 1734; Tobiah Blackett settled in Carolina in 1774; Tym Blackett settled in Virginia in 1635; Joshua Blackett settled in Maryland in 1739..