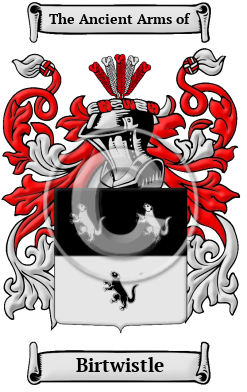 The name Birtwistle is of Anglo-Saxon origin and came from when the family lived in Birtwisle, near Padiham, in the county of Lancashire. The town was named for the Old English words bird or brid, meaning young bird or nestling, and twissel, which referred to a fork in a stream. [1]

Early Origins of the Birtwistle family

The surname Birtwistle was first found in Lancashire, where one of the first records of the family was John de Briddeslwysill who was listed there in the Assize Rolls of 1285. [2] Later, Ellis de Birtwisle, was rector of the church of St. Elphin, Warrington, Lancashire from 1368 to 1370. [3]

Early History of the Birtwistle family

It is only in the last few hundred years that the English language has been standardized. For that reason, early Anglo-Saxon surnames like Birtwistle are characterized by many spelling variations. As the English language changed and incorporated elements of other European languages, even literate people changed the spelling of their names. Scribes and monks in the Middle Ages spelled names they sounded, so it is common to find several variations that refer to a single person. The variations of the name Birtwistle include: Birdwhistle, Bertwhistle, Berdwhistle, Birtwisill, Birtwhistle, Birtwisle, Birdwistle, Birdwisle, Birdwistle, Brittwissill, Birktwysell, Brytwesle, Brytwesele, Birtwistell, Birtwessel, Briddestwysill, Briddestwyssle, Burtwisle and many more.

More information is included under the topic Early Birtwistle Notables in all our PDF Extended History products and printed products wherever possible.

Birtwistle Settlers in Australia in the 19th Century