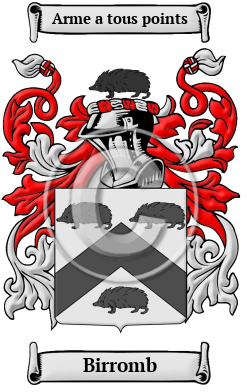 Birromb is a name that was brought to England by the ancestors of the Birromb family when they migrated to the region after the Norman Conquest in 1066. The Birromb family lived at Bryram, a township in the parish of Brotherton, in the West Riding of Yorkshire. [1]

Early Origins of the Birromb family

The surname Birromb was first found in the West Riding of Yorkshire at Byrome, or Byram, with Pool, a township, in the parish of Brotherton, Lower division of the wapentake of Barkstone-Ash. "Byram Hall is a handsome mansion, in a fine and well-wooded park of about 200 acres." [2] [3]

Early History of the Birromb family

This web page shows only a small excerpt of our Birromb research. Another 108 words (8 lines of text) covering the years 1642, 1692 and 1763 are included under the topic Early Birromb History in all our PDF Extended History products and printed products wherever possible.

Outstanding amongst the family at this time was John Byrom or John Byrom of Kersal or John Byrom of Manchester (1692-1763), an English poet and inventor of a revolutionary system of shorthand. "He was the second son and seventh of the nine children of Edward Byrom, by...
Another 47 words (3 lines of text) are included under the topic Early Birromb Notables in all our PDF Extended History products and printed products wherever possible.

Migration of the Birromb family

Many English families emigrated to North American colonies in order to escape the political chaos in Britain at this time. Unfortunately, many English families made the trip to the New World under extremely harsh conditions. Overcrowding on the ships caused the majority of the immigrants to arrive diseased, famished, and destitute from the long journey across the stormy Atlantic. Despite these hardships, many of the families prospered and went on to make invaluable contributions to the development of the cultures of the United States and Canada. Early North American immigration records have revealed a number of people bearing the name Birromb or a variant listed above: John Byrom who settled in Virginia in 1656; William Byrom settled in Virginia in 1736; Benjamin, Brambley, Edward, James, Ralph, and Samuel Byram, all arrived in Philadelphia, Pennsylvania between 1827 and 1844..