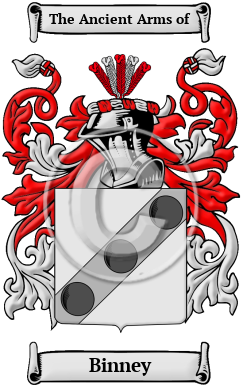 Early Origins of the Binney family

The surname Binney was first found in Maine, where the family first originated and maintained their status as one of the more distinguished families in the town of Vendée.

Early History of the Binney family

Another 27 words (2 lines of text) are included under the topic Early Binney Notables in all our PDF Extended History products and printed products wherever possible.

Binney migration to the United States +

Binney Settlers in United States in the 17th Century

Binney Settlers in United States in the 19th Century

Binney Settlers in Australia in the 19th Century

Binney Settlers in New Zealand in the 19th Century

Binney Settlers in West Indies in the 17th Century