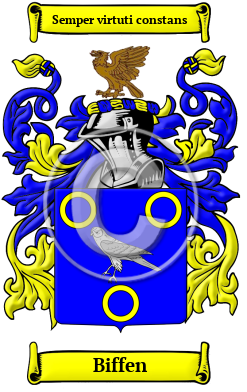 The Welsh name Biffen is a patronymic surname created from the Welsh personal name Evan. The surname Biffen was originally ab-Evan, or ap-Evan: the distinctive Welsh patronymic prefix "ab" or "ap," means "son of," but the prefix has been assimilated into the surname over the course of time. [1] [2] [3]

"The normal type of Welsh name was a patronymic: Madog ap Jevan ap Jorwerth, ‘Madoc, son of Evan, son of Yorwerth’, a type which resulted ultimately in such names as Pumfrey, Benian, Bevan, etc." [4]

Early Origins of the Biffen family

The surname Biffen was first found in Herefordshire, where they held a family seat from ancient times. One of the first record of the family was Howel ap-Evan who was listed in the Writs of Parliament c. 1300. The Calendarium Rotulorum Chartarum lists Eygneun ap Yevan, but no dates or location is provided. The plural form "Bevans is a double patronymic, part English, part Welsh, ab-Evan-s." [5]

Early History of the Biffen family

Welsh surnames are relatively few in number, but they have an inordinately large number of spelling variations. There are many factors that explain the preponderance of Welsh variants, but the earliest is found during the Middle Ages when Welsh surnames came into use. Scribes and church officials recorded names as they sounded, which often resulted in a single person's name being inconsistently recorded over his lifetime. The transliteration of Welsh names into English also accounts for many of the spelling variations: the unique Brythonic Celtic language of the Welsh had many sounds the English language was incapable of accurately reproducing. It was also common for members of a same surname to change their names slightly, in order to signify a branch loyalty within the family, a religious adherence, or even patriotic affiliations. For all of these reasons, the many spelling variations of particular Welsh names are very important. The surname Biffen has occasionally been spelled Bevan, Beavan, Beevan, Beaven, Beven, Bevin, Bevins, Bevans, Beavans and many more.

Prominent amongst the family during the late Middle Ages was Silvanus Bevan (1691-1765), Welsh apothecary, who founded the firm Allen & Hanburys; William Bevan, Pen-y-Coed; and Francis Bevans (died 1602) an English lawyer and Principal of Jesus College, Oxford from 1586 to 1602. Elway Bevin was an eminent theoretical and practical musician, the date of whose birth is unknown. He was of Welsh extraction, and received his musical education under Tallis. According to Wood (Ashmole MS. 8568, 106) he was...
Another 78 words (6 lines of text) are included under the topic Early Biffen Notables in all our PDF Extended History products and printed products wherever possible.

Migration of the Biffen family

The Welsh migration to North America in the late 19th and early 20th centuries contributed greatly to its rapid development. These migrants were in search of land, work, and freedom. Those Welsh families that survived the long ocean journey were critical to the development of new industries and factories, and to the quick settlement of land. They also added to an ever-growing rich cultural heritage. A search of the immigration and passenger lists has shown a number of people bearing the name Biffen: Arthur Bevan who settled in Connecticut in 1620; Bartholomew settled in Virginia 1634; Grace Bevan in New England 1654; Thomas Bevan in Maryland in 1663.