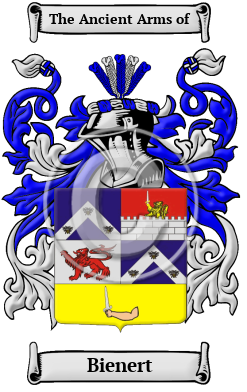 The surname Bienert may derive from (or have lent itself to) the town of Bienau in Silesia, also known as Bienowitz.

Early Origins of the Bienert family

The surname Bienert was first found in Silesia, where the name is considered to have made an early contribution to the feudal society which became the backbone of early development in Europe. The name became prominent in local affairs and branched into many houses which played important roles in the tribal and national conflicts, each group seeking power and status in an ever-changing territorial profile.

Early History of the Bienert family

This web page shows only a small excerpt of our Bienert research. Another 134 words (10 lines of text) covering the years 1590, 1651, 1754, and 1769 are included under the topic Early Bienert History in all our PDF Extended History products and printed products wherever possible.

Notables of the period with the surname Bienert were Wilhelm Biener (1590-1651) was a lawyer and chancellor of Tyrol; and Anton Johann Beinl von Bienenburg, a court...
Another 26 words (2 lines of text) are included under the topic Early Bienert Notables in all our PDF Extended History products and printed products wherever possible.

Migration of the Bienert family

Some of the first settlers of this family name or some of its variants were: Peter Bien, who came to Philadelphia in 1752; as did Gustav Bien in 1876. Caspar Biener came to the same city in 1756.

Historic Events for the Bienert family +