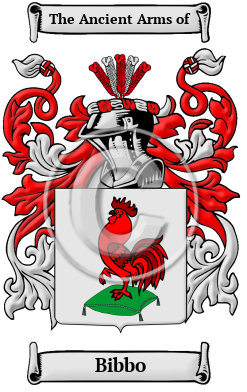 The surname Bibbo is derived from a nickname, which itself is derived from the Latin verb "bibere," which meant to drink. The original bearer of the name was a member of the von Hahn family, but he was so fond of his cups that his name was changed to Bibow. A broad and miscellaneous class of surnames, nickname surnames referred to a characteristic of the first person who used the name. They can describe the bearer's favored style of clothing, appearance, habits, or character.

Early Origins of the Bibbo family

The surname Bibbo was first found in Mecklenburg, where the name could be considered to make a great early contribution to the feudal society which became the backbone of early development of Europe. The name became prominent in local affairs and branched into many houses which played important roles in the savage tribal and national conflicts, each group seeking power and status in an ever changing territorial profile. Chronicles record the founding of this name as follows: The progenitor of the family was of the von Hahn family, but due to the great pleasure he derived from drinking his name was changed to Bibow, a name derived from the Latin word "bibere" meaning to drink. His relatives liked the name so much that they established a Coat of Arms which depicted a rooster sitting on a green cushion. This was a reference to von Hahn, who customarily sat on a green cushion. This coat of arms must have been established before 1390 because in this year Eggerd von Bibave was using a seal composed of a rooster sitting on a cushion. Other chronicles say the name derives from the family seat of Bibow in the district of Luebz in the duchy of Mecklenburg-Schwerin, which the family acquired in 1242.

Early History of the Bibbo family

This web page shows only a small excerpt of our Bibbo research. Another 94 words (7 lines of text) covering the years 1774 and 1848 are included under the topic Early Bibbo History in all our PDF Extended History products and printed products wherever possible.

Spelling variations of this family name include: Bibbow, Bibo, Bibbo, Biboe, Bibboe, Bible, Bibble and others.

More information is included under the topic Early Bibbo Notables in all our PDF Extended History products and printed products wherever possible.

Migration of the Bibbo family

Some of the first settlers of this family name or some of its variants were: Bernhard Bibo, who arrived in Philadelphia, Pa. in 1856; Jacob Bibo, age 22; settled in Texas in 1845.