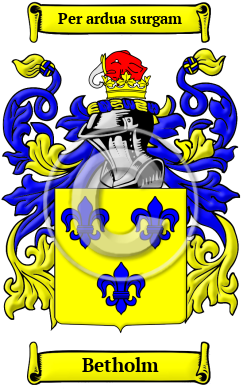 The ancestors of the Betholm family took their surname from a place name. The roots of this place name lie with the ancient Viking settlers. The Betholm surname comes from someone having lived in Beetham in Cumbria. This place name is thought to come from the Old Norse "beth," meaning "embankment." [1] The parish was recorded as Biedum in the Domesday Book and at that time in Yorkshire and was land held by Roger de Poitou. [2] More recently, the parish had a population of 1,724 in the 2001 census. Interestingly, "in digging a grave near one of the pillars in the nave of the Church [of Beetham], in Aug. 1834, upwards of 100 silver coins, chiefly of the reigns of William the Conqueror and his son William Rufus, with a few of Edward the Confessor and Canute the Dane, were discovered." [3]

Early Origins of the Betholm family

The surname Betholm was first found in Cumbria at Beetham, a parish, in the union and ward of Kendal, historically in Westmorland. [3]

Early History of the Betholm family

Spelling and translation were quite undeveloped in the Middle Ages. Consequently, the spelling of Scottish names was an inconsistent practice, usually governed by the unique ear of the scribe recording the name. Over the years, Betholm was spelled Betham, Beetam, Beetham, Beatam, Beatham, Beetem, Beedham and many more.

Another 33 words (2 lines of text) are included under the topic Early Betholm Notables in all our PDF Extended History products and printed products wherever possible.

Migration of the Betholm family

Opportunity and land greeted those who made it all the way. Some had the opportunity to solidify their new freedom by fighting in the American War of Independence, while others went or stayed north as United Empire Loyalists. Recently, the ancestors of those brave settlers have been able to recover much of their heritage through Clan societies and other patriotic organizations. A thorough examination of passenger and immigration lists has disclosed evidence of many early immigrants of the name Betholm: Richard Beetham who settled in Virginia in 1720.