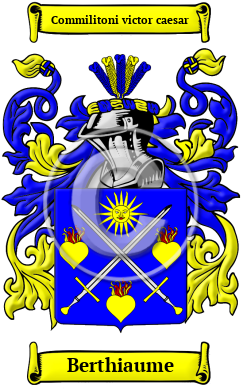 Early Origins of the Berthiaume family

The surname Berthiaume was first found in Ile-de-France, where the family held a family seat since early times.

Early History of the Berthiaume family

This web page shows only a small excerpt of our Berthiaume research. Another 72 words (5 lines of text) covering the years 1814 and 1816 are included under the topic Early Berthiaume History in all our PDF Extended History products and printed products wherever possible.

Notable amongst the family was Berthier, Prince of Wagram de Neufchâtel; and Alexandre Berthier (1638-1708) born Isaac Berthier, French army captain who assumed then first name Alexandre after his...
Another 28 words (2 lines of text) are included under the topic Early Berthiaume Notables in all our PDF Extended History products and printed products wherever possible.

Berthiaume migration to the United States +

Berthiaume Settlers in United States in the 18th Century

Berthiaume Settlers in Canada in the 17th Century

Berthiaume Settlers in Canada in the 18th Century