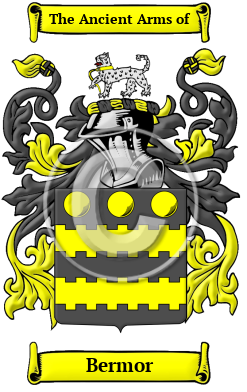 The name Bermor is part of the ancient legacy of the early Norman inhabitants that arrived in England after the Norman Conquest of 1066. Bermor was a Norman name used for a small child. The surname springs from the middle English bairn, of the same meaning. [1] [2]

Early Origins of the Bermor family

The surname Bermor was first found in Surrey at Barnes, a parish, in the union of Richmond, W. division of the hundred of Brixton. [3] This parish was originally listed as Berne [4] in the Domesday Book of 1086.

According to the Saxon Chronicle, Siward Barn was the patriot rebel against William the Conqueror. [5] After that early listing, one of the first records of the name was found in Surrey as Philip de Bernes. [6]

Early Scottish sources revealed that the name was from "Barnes in the parish of Premnay, Aberdeenshire" [7] where the first record was found in the 15th century as Robert of Bernis, a goldsmith in 1465. [7]

Early History of the Bermor family

Anglo-Norman names tend to be marked by an enormous number of spelling variations. This is largely due to the fact that Old and Middle English lacked any spelling rules when Norman French was introduced in the 11th century. The languages of the English courts at that time were French and Latin. These various languages mixed quite freely in the evolving social milieu. The final element of this mix is that medieval scribes spelled words according to their sounds rather than any definite rules, so a name was often spelled in as many different ways as the number of documents it appeared in. The name was spelled Barnes, Barns, Barnis, Bernys, Barness and others.

Distinguished members of the family include Robert Barnes (1495-1540), English Protestant divine and martyr, a Norfolk man, born in the neighbourhood of Lynn. "Barnes and his two companions, as heretics, were committed to the flames." [8] Richard Barnes (1532-1587), Bishop of Durham, born at Bould, near Warrington, in Lancashire, son of John Barnes and Agnes Saunderson, his wife. His son, Barnabe Barnes (1569?-1609), English poet, born in Yorkshire...
Another 66 words (5 lines of text) are included under the topic Early Bermor Notables in all our PDF Extended History products and printed products wherever possible.

Migration of the Bermor family to Ireland

Some of the Bermor family moved to Ireland, but this topic is not covered in this excerpt.
Another 74 words (5 lines of text) about their life in Ireland is included in all our PDF Extended History products and printed products wherever possible.

Migration of the Bermor family

Because of the political and religious discontent in England, families began to migrate abroad in enormous numbers. Faced with persecution and starvation at home, the open frontiers and generally less oppressive social environment of the New World seemed tantalizing indeed to many English people. The trip was difficult, and not all made it unscathed, but many of those who did get to Canada and the United States made important contributions to the young nations in which they settled. Some of the first North American settlers with Bermor name or one of its variants: Robert Barnes, who came to Virginia in 1608; Barnaby Barnes who settled in Virginia in 1635. Also settling in Virginia were, Charles Barnes in 1653; Dorothy Barnes in 1653.