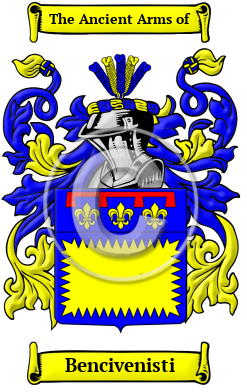 Early Origins of the Bencivenisti family

The surname Bencivenisti was first found in Italy. Instances of the name occur in almost every part of Italy, though specific forms of the name tend to be restricted to one area. For instance, the variation Bencivenga comes from Naples, whereas Bentivegna appears most frequently in Sicily and Bencivenni is rarely seen outside of the province of Emilia. The name Bencivenisti, like many surnames originated as a personal name. Meaning "well come," or "welcome." The name was given to babies as a way of thanking God for a safe birth and was very popular in the 10th and 11th centuries. The name may have been taken as a surname purely arbitrarily, or it may have been the personal name of one of the first bearer's relatives, most likely his father.

Early History of the Bencivenisti family

Migration of the Bencivenisti family