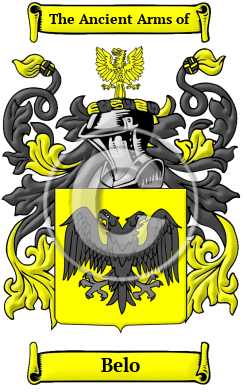 Early Origins of the Belo family

The surname Belo was first found in Pomerania, where the name was closely identified in early mediaeval times with the feudal society which would become prominent throughout European history. The name would later emerge as a noble family with great influence, having many distinguished branches, and become noted for its involvement in social, economic and political affairs. Chronicles first mention the family in the year 1200. The ancestral castle was called Peest and was located in the district of Lauenburg-Butow. This castle was owned by Gerd von Below in 1335, and he is taken to be the founding father of many of the most prominent branches of the family. In the 14th century, they expanded into Mecklenburg and the Mark region. In Mecklenburg, the ancestral seat of the family was Below in the district of Wredenhagen in Mecklenburg-Schwerin.

Early History of the Belo family

This web page shows only a small excerpt of our Belo research. Another 81 words (6 lines of text) covering the years 1674, 1691 and 1704 are included under the topic Early Belo History in all our PDF Extended History products and printed products wherever possible.

Spelling variations of this family name include: Below, Bellow, Belloe, Beloe, Bellau, Bellaut and many more.

Prominent bearers of the name Belo at this time were Bertram von Below, the Lord of Gatz, who became Privy Councillor to Duke Bogislaus in 1674. In 1691, Friedrich III of Brandenburg...
Another 32 words (2 lines of text) are included under the topic Early Belo Notables in all our PDF Extended History products and printed products wherever possible.

Belo migration to the United States +

Belo Settlers in United States in the 19th Century

Historic Events for the Belo family +