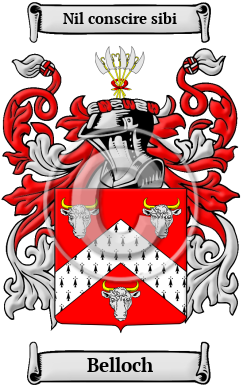 The Belloch surname is derived from the Middle English word "bullok," from the Old English "bulluc," which refer to a "young bull." As a name, it most likely evolved from a nickname for an exuberant young man, or a metonymic occupational name for a keeper of bullocks. [1] [2]

Early Origins of the Belloch family

The surname Belloch was first found in Roxburghshire where one of the earliest records of the name was Adam Bulloc who witnessed an agreement the abbot and the monks of Newbattle c. 1250. A few years later, Richard Bullock was slain at the Battle of Cambok in 1278. [3]

"The name was probably introduced from England, and in the fourteenth century there was 'a family of sailors of the name trading between English and Scottish port.' " [3]

"William Bulloc was attorney for the provost of Haddington, 1329. Another William Bullok, 'an ecclesiastic of obscure birth but great military talent was prominent in the early part of the reign of David 11, but eventually falling under suspicion was confined in a squalid dungeon in Lochindorb Castle to die of cold and hunger in 1346. Robert Bullock, custumar of Aberdeen, 1358-1370 may be the Robert Bullok who witnessed a deed of sale, 1383. " [3]

Balloch Castle was north-east of the village of Kenmore, Perth and Kinross and was built in 1552. In the early 19th century, Balloch Castle was demolished by the Campbells of Breadalbane so that a new much larger castle could be built.

Further to the south in England, the Hundredorum Rolls of 1273 listed a wide variety of spellings and locations: Alan Bulloc, Lincolnshire; Ralph Bullokke, Norfolk; Godwin Bulloc, Suffolk; Richard Bulluc, Oxfordshire; and William Bolloc, Oxfordshire. The Yorkshire Poll Tax Rolls of 1379 listed Walterus Bullok as holding lands there at that time. [4]

Early History of the Belloch family

Spelling variations of this family name include: Bullock, Bullocke, Bulloch, Bullok, Bulloc and others.

Notable amongst the family name during their early history was Henry Bullock (d. 1526), an English divine, educated at the university of Cambridge. George Bullock (1521?-1580?), was a Catholic divine, born in or about 1521. It has been conjectured that he received his early education at Eton, whence he removed to St. John's College, Cambridge. Christopher Bullock (1690?-1724), was an English actor and dramatist, spoken of in the playbills as Bullock, junior, was the son of William Bullock (1657?-1740?), also an actor. Thomas Bullaker (1604?-1642), was a Franciscan...
Another 86 words (6 lines of text) are included under the topic Early Belloch Notables in all our PDF Extended History products and printed products wherever possible.

Migration of the Belloch family to Ireland

Some of the Belloch family moved to Ireland, but this topic is not covered in this excerpt. More information about their life in Ireland is included in all our PDF Extended History products and printed products wherever possible.

Migration of the Belloch family